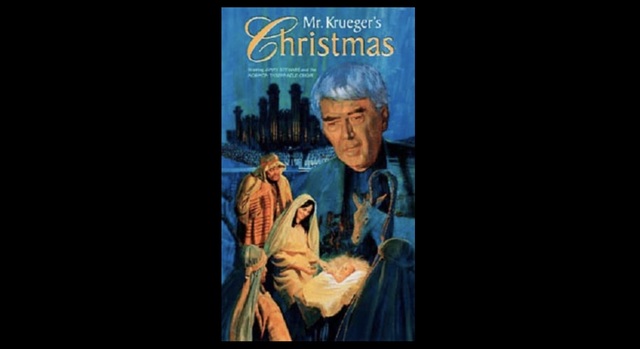 Watching Jimmy Stewart in the Christmas classic It’s a Wonderful Life is a yearly holiday tradition for many. That has definitely been the case in my family, but there is another Jimmy Stewart holiday film that has also been a staple in our home—Mr. Krueger’s Christmas. The film was directed by Kieth Merrill and was released by The Church of Jesus Christ of Latter-day Saints in 1980, making this Christmas its 40th anniversary.

It features the music of The Tabernacle Choir and Jimmy Stewart’s character—Mr. Krueger, a lonely janitor who talks to his cat as if it is a person.

The short film was actually the brainchild of Michael McLean, who called the film's coming to fruition a miracle.

In an article for Meridian Magazine in 2005, McLean said, “Over these 25 years I’ve heard so many ‘faith promoting rumors’ about Mr. Krueger’s Christmas from people who’ve ‘sworn’ the stories were true: how Stewart was hired, miraculous interventions from President Kimball, how the Church approved the film, etc. I’ve thought I ought to write a little novella about my experience as the film’s producer, but I wondered how the truth could possibly compete with some of the rumors.”

But Stewart’s explanation in a press conference was simple and to the point when he was asked why he chose to “do a film so off-Hollywood”: “I liked the script. I liked the message. I thought it was time we needed something like this.”

Recalling the filming experience, Merrill remembered Stewart’s hesitancy prior to a scene where Mr. Krueger conducts the Tabernacle Choir. Merrill recalls him saying, “Kieth, I suddenly realize that I need professional instruction before I go out there and pretend to lead that choir. Normally I could act it, but that is THE Mormon Tabernacle Choir out there! They deserve more than some actor faking it. They deserve the best that I can give them, even if it’s only for a movie. Is there some way you can help me?” They called in Jerold Ottley, the Choir's conductor at the time, to give Stewart some pointers.

The monologue Stewart delivers gets me every time as Mr. Krueger approaches the manger and speaks to the baby Jesus. He recalls the significant moments in his life when he knew the Savior was with Him.

“I’m Willy Krueger, I’m custodian over at the Beck Apartments, but you know that, don’t you? You know that. I guess nobody here can hear me or see me except you. I didn’t bring a gift, but I guess that’s not important. Thank you for everything you’ve done for me. As long as I can remember, you’ve been right by my side. I’ll never forget when you walked with me, right in those first few hours after I lost Martha. I’ve always been able to count on you when I felt dark inside, and you were right there every time—right there, even when I didn’t feel good about myself. I knew that you cared for me enough and that made me feel better,” Stewart says before continuing his conversation with the Christ child.

He concludes, “I love you. You are my closest, my finest friend and that means that I can hold my head high wherever I go. Thank you.”

But what you may not know is that Jimmy Stewart was insistent that he shoot the scene where Mr. Krueger visits the manger in one take.

“For me, this scene and these words are very personal and very real, and I will not be able to do it twice,” Stewart said. And while there were concerns surrounding filming in one take, Merrill later wrote, “I am confident in telling you that Mr. Krueger’s emotions as he kneels and talks to the babe in the manger reflect in reality the feelings of James Stewart toward the Lord, Jesus Christ. The reverence for the Savior of the World so beautifully manifested by Mr. Krueger was a genuine sentiment for this marvelous actor who brought the wondrous old man of Michael McLean’s imagination to life. Gratefully, he agreed to one additional take that gave us what we needed to edit the scene together.”

Read these anecdotes and more from Merrill on LatterdaySaintMag.com.