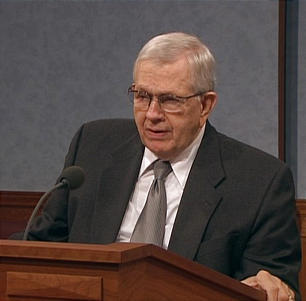 President Boyd K. Packer has returned to Chile several times since his first assignment there 40 years ago.

"And I am glad now to be back here with you again. Now, that may sound strange to you that I say 'to be back here with you,' " President Packer said in an address during the Southern Chile Stake Conference broadcast on Feb. 20. He noted that several thousand miles lay between where he was speaking — a studio in the Conference Center in Salt Lake City — and Church buildings in 40 stakes and 16 districts throughout southern Chile where members had gathered. A Church satellite broadcast brought them together.