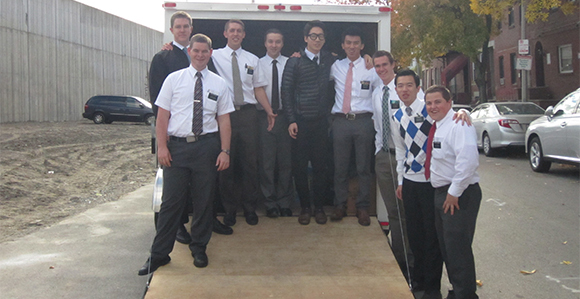 From making cakes for a displaced expectant mother to providing crucial translation, shelter, and supplies, the Church members and missionaries in Boston have come to the rescue for those who lost their homes in a fire in Boston.

On October 19, an electrical fire sent smoke and flames through a large apartment complex in Boston’s historic Chinatown. No lives were lost and there were only a few smoke-related injuries, but about 40 residents were forced from their damaged apartments. Most residents are elderly.

Many found refuge in a temporary Red Cross shelter organized at the nearby Chinese Consolidated Benevolent Association of New England. However, communication between many of the English-speaking Red Cross workers and the Chinese-speaking displaced folks proved challenging.

Jerry Hsieh serves as the leader of the Chinese-language group from the Cambridge Massachusetts Stake. When he learned about the displaced Chinatown residents, he began making calls to local Red Cross officials to offer assistance.