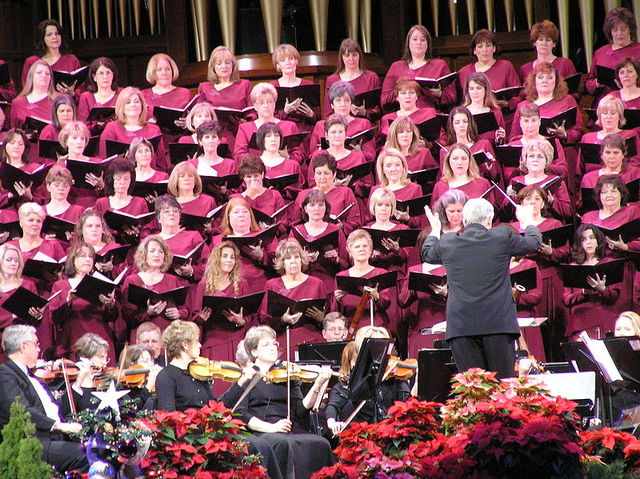 Choir giving away tickets to Christmas concert to Facebook fans

Dan Woolley was an unsuspecting BYU-Idaho student when he logged onto his Facebook and became a fan of the Mormon Tabernacle Choir’s Facebook page. In that moment, Woolley would become the 100,000th fan on the choir’s page and receive two free tickets to the choir’s upcoming Christmas concert.

In celebration of reaching the 100,000th fan mark on Facebook and in honor of the 100th year of choir recording, the Mormon Tabernacle Choir is sponsoring a ticket give away to its Christmas concert featuring David Archuleta and Michael York. The choir reserved 100 tickets (50 sets of 2 tickets) and has been every giving them away every Tuesday and Friday until December 10th, 2010. The ticket give away is open to all those who simply go onto Facebook and ‘like’ the choir’s fan page.

The choir’s musical strains bridge cultural and religious differences in their unique song selections, making the music relatable to a wide range of people. The choir’s influence around the world is seen in the number of international fans that it has amassed on its fan page.

According to the choir’s homepage, “The United States still leads in total numbers [of Facebook fans] but the Philippines holds the second slot with Mexico and Chile in third and fourth. Others in the top 10 include Canada, Australia, Argentina, Colombia and Peru. Not surprising that posts are primarily in English; Spanish is second, then Portuguese and French.”

Karen Skaines Kruger, a fan page member from the Salt Lake City area,  encourages others to become fans on Facebook because “it is a great way to follow the choir’s latest news.”  She became a fan because “the Choir has long been my favorite part of General Conference. . . . To me, music conveys the Spirit in ways that just aren’t possible otherwise.”

As part of the Choir’s ticket give away, some winners will even be given the chance to attend the Choir’s Music and the Spoken Word program on December 19th , which will include a mini concert featuring David Archuleta and Michael York after the regular weekly program.
So, if you are feeling lucky and are a fan of the Mormon Tabernacle Choir, this could be the chance of a lifetime for you to see the choir live in concert. It is not too late to go on to the choir’s Facebook page and enter the drawing.

To find out more about the Christmas concert giveaway, information about future choir concerts and events and to become the choir’s fan on Facebook, visit mormontabernaclechoir.org.