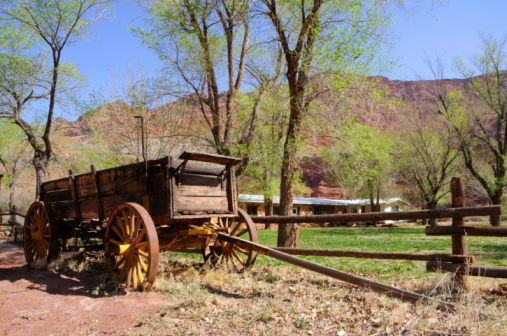 The “Reformation” and the Utah War

In early 1857, President Buchanan decided to replace Brigham Young as governor and, in what became known as the Utah War, sent an army to Utah to escort his replacement. Latter-day Saints feared that the oncoming army—some 1,500 troops, with more to follow—would renew the depredations of Missouri and Illinois and again drive the Saints from their homes. . . . As these events unfolded, Brigham Young declared martial law in the territory, directed missionaries and settlers in outlying areas to return to Utah, and guided preparations to resist the army. Defiant sermons given by President Young and other Church leaders, combined with the impending arrival of an army, helped create an environment of fear and suspicion in Utah.

Over the next few days, events escalated, and Mormon militiamen planned and carried out a deliberate massacre. They lured the emigrants from their circled wagons with a false flag of truce and, aided by Paiute Indians they had recruited, slaughtered them. Between the first attack and the final slaughter, the massacre destroyed the lives of 120 men, women, and children in a valley known as Mountain Meadows. At the peak of this tension, in early September 1857, a branch of the territorial militia in southern Utah (composed entirely of Mormons), along with some Indians they recruited, laid siege to a wagon train of emigrants traveling from Arkansas to California.

Unlike most other Americans, Latter-day Saints viewed Indians as a chosen people, fellow Israelites who were descendants of Book of Mormon peoples and thus heirs to God’s promises. . . . At times, however, Church members clashed violently with Indians. . . . At a council of Church leaders in Salt Lake City on January 31, 1850, the leader of Fort Utah reported that the Utes’ actions and intentions were growing increasingly aggressive: “they say they mean to hunt our Cattle. & go & get the other Indians to kill us.” In response, Governor Young authorized a campaign against the Utes. A series of battles in February 1850 resulted in the deaths of dozens of Utes and one Mormon. In these instances and others, some Latter-day Saints committed excessive violence against native peoples.

In the first two decades after the Church was organized, Latter-day Saints were often the victims of violence. Their adversaries felt threatened by the Saints’ growing numbers, which meant that Mormons could increasingly control local elections. These opponents attacked the Saints, first verbally and then physically. Church leaders, including Joseph Smith, were tarred and feathered, beaten, and unjustly imprisoned. . . . The expulsion from Missouri—involving at least 8,000 Latter-day Saints—occurred during the winter months, heightening the suffering of the thousands of refugees who lacked adequate food and shelter and were sometimes subject to epidemic diseases.