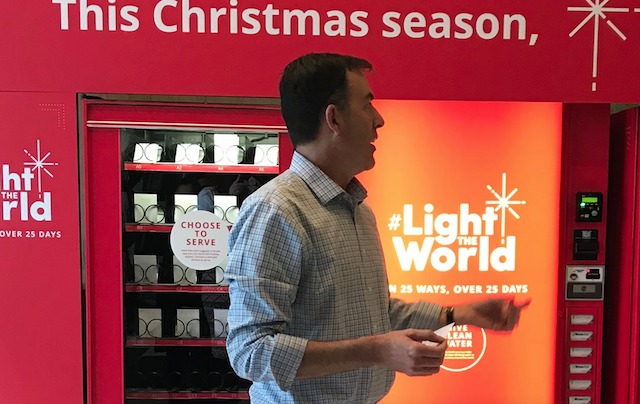 Goats, chickens, eyeglasses, pacifiers—not exactly the variety most would expect when looking at vending machines. But that's the point for this particular Light the World feature, which also happens to be the first of its kind.

"BonCom and the Church were looking for ways to do something different and unique to light the world in a way that would be something that nobody has ever seen before," said Kami Fisher, the influencer campaign manager for Bonneville Communications. "We thought, 'Well what would work for every single day that someone could come and donate?'"

The solution was four service vending machines, each containing something unique for users to serve others this holiday season. The machines, which debuted in the Day 1 video for Light the World, are available throughout December in the Joseph Smith Memorial Building.

Each machine contains items that will be donated to charities like care.org, the Utah Food Bank, EyeCare 4 Kids, WaterAid, and Water For People. 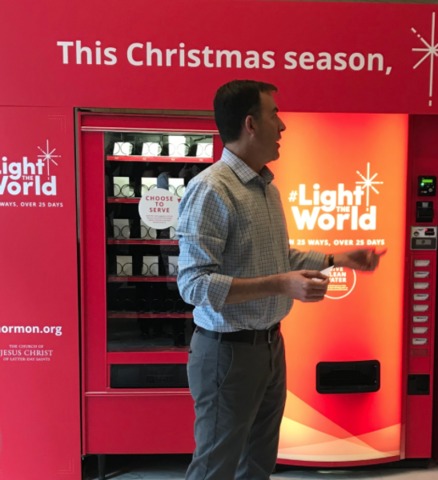 So besides Hershey's chocolate bars and other typical vending machine food items, there are also vouchers for two chickens for $25, eyeglasses and seeds for $5, and clean water from anywhere between $2 to $25.

And the most expensive item? A voucher for a $75 goat. But the price on everything, including animals, is well worth it, Fisher says.

"The animals not only serve as a food source but they also serve as an income source so it's almost like a two for one," she says. "And they're going to go all over the world."

And for those who may not have money to spare during December, there's a special vending machine where users can receive cards depicting acts of service for free. These include anything from listening to a friend to saying hi to a stranger. 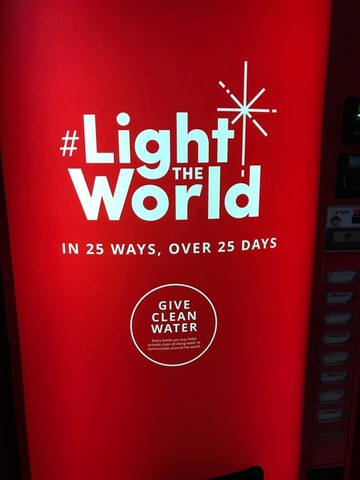 The water vending machine for the Light the World campaign

Though these one-of-a-kind vending machines will only be around until the end of December, Fisher hopes they will bring about a kind of change in someone's life that will last much longer this holiday season.

"We hope that they will inspire people," Fisher says. "That they will bring some joy into the holiday season and be able to really make people feel that they are contributing to something important, something special, and that they are doing something to change the world. To change somebody's life even if it's just a pair of glasses."