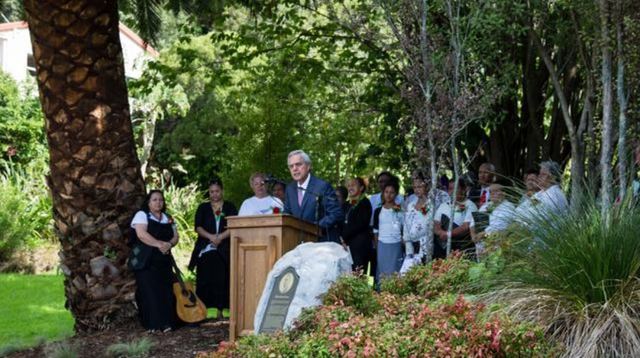 "In his early years in New Zealand, Matiu Kauri [Matthew Cowley] came here often to study and learn the Māori language, meditate and commune with Heavenly Father," Elder O. Vincent Haleck said during a monument dedication. "It was the peaceful surroundings of this grove that blessed and helped give voice to his Māori language and love for the Māori people. We are honoured that the City Council and leaders of this community have chosen to name this grove the Matiu Kauri Grove.”

On Saturday, 15 April 2017, members and guests of The Church of Jesus Christ of Latter-day Saints gathered in Matiu Kauri Grove in Tauranga, New Zealand to witness the dedication of an historic marker in the place where a hundred years ago Matthew Cowley, a 17-year-old American missionary, often came to ponder, fast, pray and study the Māori language.

Matiu Kauri is the Māori name for Matthew Cowley.

As a young missionary, Elder Cowley quickly developed a desire not only to learn the Māori language, but also to immerse himself in the rich local culture. These efforts produced in him a deep and abiding love for Māori whom he served tirelessly until five years later when he returned to his homeland in 1919.

Cyclone Cook had been bearing down on Tauranga Thursday and Friday last week, but the prayers of the organisers were answered as the skies cleared Saturday.