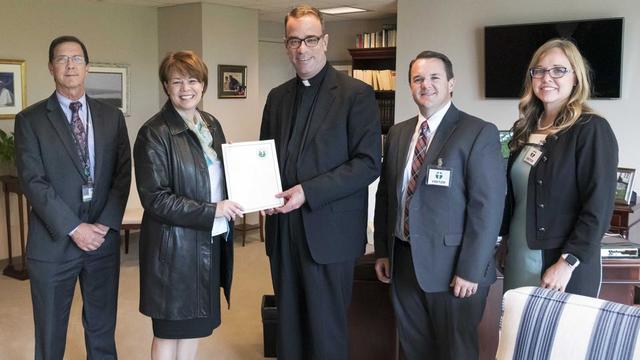 For the third year in a row, The Church of Jesus Christ of Latter-day Saints is providing a grant to the nine national refugee resettlement agencies in the United States. Representatives of Latter-day Saint Charities, the humanitarian organization of the Church, were on the East Coast this week to hold discussions and deliver a $4 million grant, which includes $1.2 million in cash and $2.8 million in commodities. 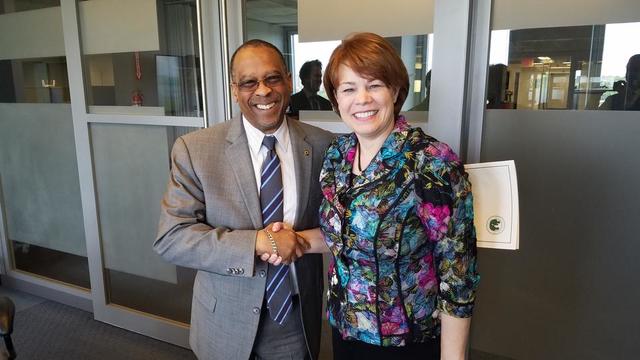 Refugees leave homes, businesses, family and friends in hopes of finding a safe and peaceful life for their children. Those who come to the United States are resettled by one of nine national resettlement agencies.

"As followers of Jesus Christ, we are under a heavenly obligation to love God and love our neighbors in better ways," said Sister Sharon Eubank, president of Latter-day Saint Charities and first counselor in the Church’s Relief Society general presidency. "We are impressed by the innovative approaches refugee resettlement agencies are using to help people learn English, find jobs and culturally adapt to the United States. Our partnership is meant to accelerate the work and highlight ways families can get involved in helping refugee neighbors settle into a new place."

Sister Eubank visited three resettlement agencies based in Baltimore, Maryland, and Washington, D.C., on Tuesday, May 14, 2019, to deliver the donations and strengthen relationships with the partners. On Wednesday, she met with three additional agencies in New York City.

The grant was given to the following nine charitable organizations in the United States that are authorized to resettle refugees:

The cash and in-kind donations are given to the national offices for local distribution across the United States.

“Lutheran Immigration and Refugee Service (LIRS) is immensely grateful to The Church of Jesus Christ of Latter-day Saints for the generous gifts of furniture and other in-kind goods for newly arrived refugees, along with self-reliance grants that allow refugees to advance their education and career paths,” said Krish O’Mara Vignarajah, president and CEO.

“LIRS’s partners in 30 communities across the country utilize the support of the Church to resettle highly vulnerable refugees, including in North Dakota, Nebraska, Colorado and Massachusetts,” said Vignarajah. “The Church’s support provides new, high-quality furniture for new arrivals in these communities, and LIRS is proud to count the Church as one of our strongest partners.”

“Through the generous support of The Church of Jesus Christ of Latter-day Saints we will be able to provide more critical services to refugee families as they strive to rebuild their lives in the United States and secure a better future for their children,” said Erol Kekic, senior vice president, Church World Service. “We are grateful for this partnership and for the work we will do together for vulnerable communities across the country.”

“When refugees first arrive in the United States, they are starting over — building a new life for themselves and their families,” said Jennifer Sime, senior vice president of U.S. programs at the International Rescue Committee. “Through our partnership with Latter-day Saint Charities, we’re able to ensure that recently resettled refugees have the resources — spanning from furniture in their new apartment and food in the fridge to economic empowerment programs — to start fresh, reclaim their lives and build a brighter future for themselves, their families and new communities.”

For the past two years, Latter-day Saint Charities has donated $1.2 million cash and $3.8 million commodities to the nine national refugee resettlement agencies in the country. In-kind donations include furniture and mattresses to furnish apartments, food and other necessities, as well as supporting programs for newly arriving refugees.

Donations from members of the Church to the Humanitarian Fund over the past year funded the grants delivered this week.

Lead image of Sister Sharon Eubank, president of Latter-day Saint Charities, presenting a grant from the Church to the Reverend Monsignor J. Brian Bransfield (center), general secretary of the United States Conference of Catholic Bishops (USCCB). All images from the Church's newsroom.