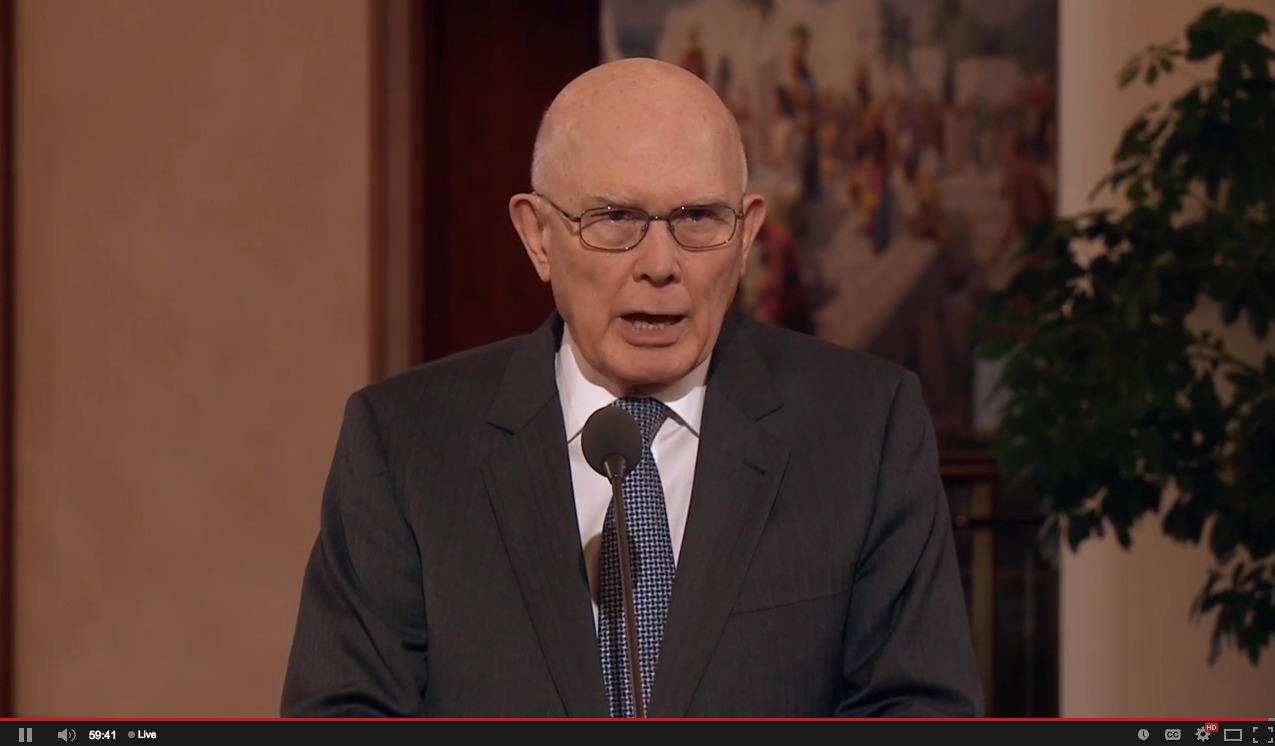 This morning, the Mormon Newsroom announced a special news conference to be held on Temple Square. The topic they revealed as "Religious Intolerance and Discrimination." Speakers at the conference included Elder D. Todd Christofferson, Sister Neill F. Marriott, Elder Dallin H. Oaks, and Elder Jeffrey R. Holland. Each took a few minutes to share some of the churches thoughts on the increasing concern over the place of religious freedom in our society.

Elder Christofferson started off the event by explaining that no change in Church teachings or doctrine would be announced, but that the purpose of the conference was to find a way to move forward with those with different opinions and find fair solutions for everyone.

Sister Marriott discussed the difficulty of affirming the rights of some without taking away the rights of others and reminded members of God's expectation for us to treat one another with love and respect.

She explained, "The debate we speak of today is about how to affirm rights for some without taking away from the rights of others. On one side of the debate we have advocates of LGBT rights. This movement arose after centuries of ridicule, persecution and even violence against homosexuals. Ultimately, most of society recognized that such treatment was simply wrong, and that such basic human rights as securing a job or a place to live should not depend on a person’s sexual orientation."

Elder Oaks mentioned recent examples of freedom of expression and religion being suppressed in modern society and offered the following statement:

“When religious people are publicly intimidated, retaliated against, forced from employment, or made to suffer personal loss because they’ve raised their voice in the public square, donated to a cause, or participated in an election, our democracy is the loser.”

He also discussed the irony of those who strive to claim rights for others, such as the LGBT community, but do not allow space for opposing views:

“The precious, constitutional right of free speech does not exclude any individual or group, and a society is only truly free when it respects freedom of religious exercise, conscience, and expression for everyone, including unpopular minorities.”

Four core beliefs were listed, based on the teachings of Jesus Christ and with an effort to provide fairness to all.

1. We claim for everyone the God-given and Constitutional right to live their faith according to the dictates of their own conscience without harming the health or safety of others.

2. We acknowledge that the same freedom of conscience must apply to men and women everywhere to follow the religious faith of their choice or none at all if they so choose.

3. We believe laws ought to be framed to achieve a balance in protecting the freedoms of all people while respecting those with different values.

4. We reject persecution and retaliation of any kind including persecution based on race, ethnicity, religious belief, economic circumstances, or differences in gender or sexual orientation.

Elder Holland was the concluding speaker and began his remarks by saying that, "Accommodating the rights of all people, including their religious rights, requires wisdom and judgment, compassion, fairness, politically it certainly requires dedication to the highest level of statesmanship. Nothing is achieved if either side resorts to bullying, political point-scoring, or accusation and bigotry."

He asserted the right of families to conduct religious activities in the home and teach their children according to their own religious values and denounced acts that force religious people to act against their beliefs in their employment. He closed by referring to an 1835 statement found in the Doctrine & Covenants, reminding all that we are accountable to God to responsibly exercise our beliefs and that the proper role of government is to protect the public interest without encroaching on free exercise, or what the scripture refers to as "freedom of the soul" and offered the following alternative to intolerance:

You can watch the conference in its entirety below: