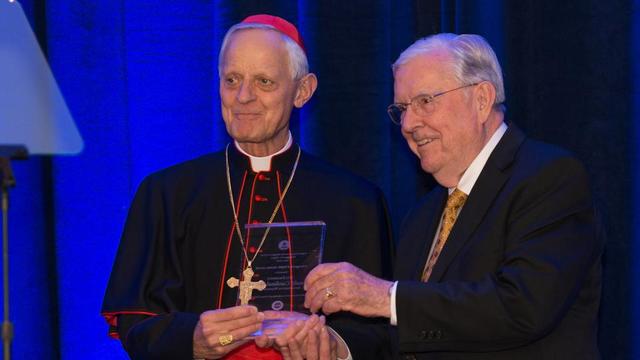 Church Honors Catholic Cardinal: "We, Mormons and Catholics, Stand Together"

“We, Mormons and Catholics, stand together in our recognition [of] freedom of religion [and] freedom of worship — the focus of the 11th article of faith in the Mormon Church,” said Cardinal Wuerl.

President M. Russell Ballard of the Quorum of the Twelve Apostles of The Church of Jesus Christ of Latter-day Saints honored His Eminence Cardinal Donald Wuerl, Archbishop of Washington, Saturday night, June 2, 2018, for his commitment to religious freedom and his devotion to Deity.

“Cardinal Wuerl, we thank you for your commitment to religious liberty and, more importantly, for your example of a life dedicated to our Lord Jesus Christ,” said President Ballard, who presented the Catholic prelate with the Brigham Young University Management Society's Distinguished Community Leader Award. “We are grateful for your example and friendship, Cardinal Wuerl. We admire your values amidst a culture that seems more hostile to religious faith.”

In his keynote speech at the evening gala hosted by the BYU Management Society at the Marriott Crystal Gateway Hotel in Arlington, Virginia, Cardinal Wuerl spoke of the importance of deepening interfaith relationships to strengthen religious liberty.