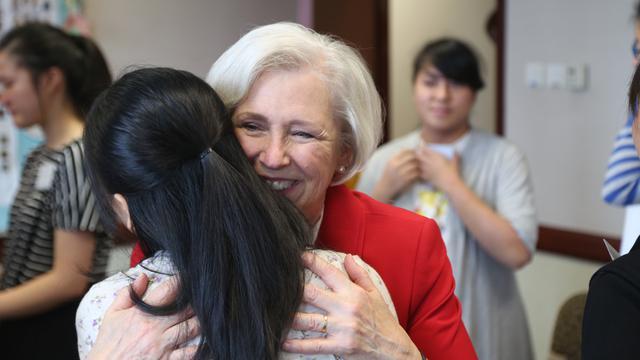 MR says: Two women general officers of the Church recently visited Latter-day Saints in a former landfill known as “trash mountain” as well as other places throughout Asia, observing how the Church has flourished despite hardship.

Two general officers of The Church of Jesus Christ of Latter-day Saints are optimistic about the future for Mormon women and children in Asia. Neill F. Marriott, second counselor in the Young Women general presidency, and Cheryl A. Esplin, first counselor in the Primary general presidency, recently returned from a trip to Hong Kong, Cambodia and Mongolia, where they met with children, young women, women leaders and missionaries.

“When I think of coming here, I think of reaching out to the members of the Church in Hong Kong, … that it doesn't really matter where we are, we all love Him and want to strengthen each other,” said Sister Marriott upon her arrival in Hong Kong, located in southeastern China, the first stop on their inaugural international trip together in early November.

Hong Kong is home to nearly 25,000 Latter-day Saints, 37 congregations and one temple.

Sister Esplin was excited to minister among the children. “They are just beautiful children,” she said.

“It starts with these little ones,” reflected Sister Esplin. “It starts in the homes and so a lot of what we need to talk about in Primary is how do we strengthen the home?”

Sister Marriott continued, “I think one of my main messages to the young women [is] stay firm. … They will be the anchor of this Hong Kong area. They will be the ones that [will] establish the families.”