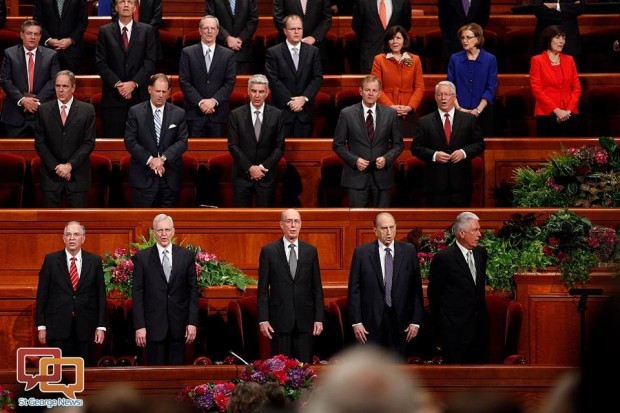 MR says: Many Latter-day Saints have expressed concerns for President Thomas S. Monson after he struggled through the closing remarks of his talk Sunday morning. Many have reached out to our prophet to show their love and support.

President Monson . . . I Wish I Could Have Held You Up

During the Sunday morning session of The Church of Jesus Christ of Latter-day Saints’ 185th semiannual general conference, broadcast worldwide from Salt Lake City, President Thomas S. Monson rose to address those gathered at the conference and those watching at various places throughout the world. Following Monson’s address, church members have become very concerned — not about their prophet’s remarks, but about his health.

During the broadcast, Monson started his speech strong and clear-eyed, but toward the end of his address he slowed, began repeating some words and seemed to have difficulty standing. He was slumped, leaning on the pulpit to support himself, and at the end of his speech he needed help to return to his seat.

Later in the conference, however, Monson stood during the congregational hymn and appeared to be feeling better.

No official statement on Monson’s condition has been issued by the LDS Church as this report is published. A church representative did offer that Monson is weary but well, adding: