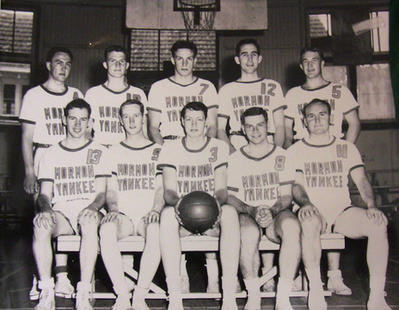 Church ball today sometimes gets a bad rap, but it wasn't always that way.

Back in 1937, local Church authorities in Australia sponsored a traveling basketball team. The group played exhibition games against other local teams to create a more positive image of The Church of Jesus Christ of Latter-day Saints in the area.

The group, known as the "Mormon Yankees," played up through 1961, and found huge success:

Reports in the LDS Church News of 17 November 1956 indicated that “throughout the games, literature of the Church was distributed to the hundreds of spectators, which has resulted in a growing interest of investigators and a great deal of favorable publicity for the Church in Australia.” The article also reported that proceeds of each game were given to the building fund of the various branches of the Church in Melbourne. (Mormon Newsroom, "Mormon Missionaries Played in Olympic Games in Australia.")

During their heyday, between 1955 and 1960, the Church in Australia tripled in size.

But just who were the "Mormon Yankees"?

Missionaries. Led by Elder Loren C. Dunn, a former BYU basketball player, the group of young men were composed of active missionaries, tasked to use their talents to build bridges with the community. By playing basketball.

The program was initially created using the missionaries in the area, but after a visit by President David O. McKay in 1955, many missionaries with ball handling skills were specifically sent to Australia to keep the high-profile program alive.

The team was so good, they even beat the Australian Olympic team in an exhibition match before the 1956 Melbourne Olympics. Players DeLyle H. Condie and Paul Grant from the University of Utah, Mark Frodsham from BYU, Don Hull from Utah State, and James Nyle Garn from Rick's College (now BYU-Idaho) all played on the team that year.

Even former Presiding Bishop H. David Burton played on the team at one point.

Though the program was shut down in 1961, the Mormon Yankees still inspire and intrigue members today--to the point that an Australian filmmaker is set to make the story into a movie.

"The Mormon Yankees story is an incredible story that allowed the church to build on a strong foundation in Australia ... by using basketball," says director Darran Scott. "They definitely brought the Church out of obscurity."

The film, entitled "The Spirit of the Game," is set to be released in late 2015.