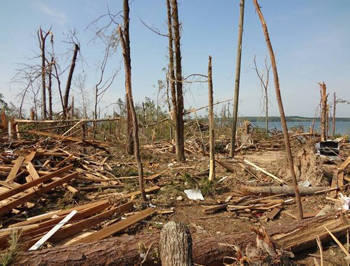 Less than four days after a tornado ripped through the area and after a short 7 a.m. sacrament meeting on the back porch of a member's home, 28 men from the Montgomery Alabama Stake reported for duty at the nearby Elmore County Emergency Management's temporary headquarters in Eclectic, Ala., on May 1. At the headquarters, they were joined by 12 more stake members plus 10 men from three other local Christian churches, swelling their number to 50.

The 50 men performed volunteer tornado cleanup work for most of the day.

The tornado mercilessly cut a wide swath late in the day on April 27. More than 230 Alabamians lost their lives to killer tornadoes. This picturesque area of Elmore County along the shoreline of Lake Martin was home to six of those victims.

On the west side of the lake, the tornado hit a 26-building, special needs children's facility that was fortuitously empty of inhabitants when the tornado passed through. Children's Harbor was scheduled to begin serving 300 children the very next day. Only one caretaker couple was on site, and they survived.