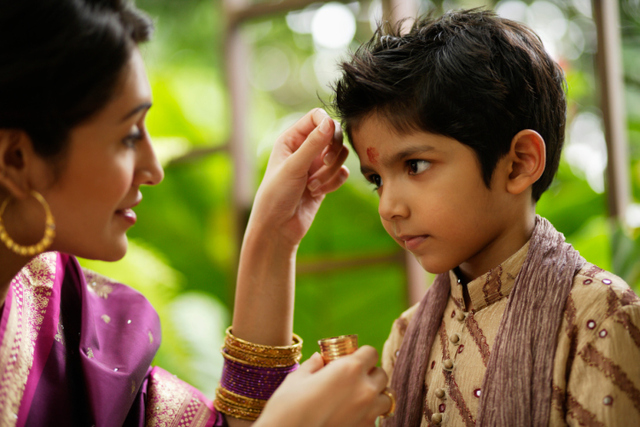 Common Ground: Latter-day Saints & the Religions of the World

As we begin to learn more of selected religions of the world, we should remember that every person who has ever lived on this earth was and is a child of God. God loves each child and knows what each needs in his or her earthly experiences to bring them back to Him. He has given each, along with agency, the guidance he or she needs through scripture and inspiration.

We are all pilgrims on the way back to our Heavenly Father. Though our paths may differ, we will all finally be presented with the fullness of the gospel of Jesus Christ with the priesthood and its saving ordinances—either on this side of the veil or on the other (Doctrine & Covenants 138).

With these thoughts in mind, let us now explore some of the faiths God has given to our brothers and sisters

Hinduism is a highly varied faith, but it is beautiful in its diversity. People seek God, and for those who live their faith well, they live very much as do Latter-day Saints with similar standards and values.

Origins: India, one of the oldest known religions, no founder

Hindus and Latter-day Saints share two common human problems: actions have consequences, and human beings cannot be perfect in this lifetime. They each respond to these problems in different but logical ways.

Hinduism responds with the ideas of karma and reincarnation. Every act creates karma that will manifest itself sooner or later. Thus, a person is wealthy because of karma from some past life. Likewise, persons are afflicted with birth defects, illness, poverty, or a lower class, all because of karma. We must live out our lives until all the karma that placed us in a given situation has burned down like a candle. When the karma that has put us in a particular life form—god, human, animal, or demon—is exhausted, then we will return in another life form determined by karma.

This is the cycle of reincarnation. The goal of Hinduism is to gain release from this cycle. Through living their lives righteously and fulfilling their duties—which include qualities such as patience, truthfulness, restraint, purity, liberality, self-control, obedience toward one’s gurus (leaders), sympathy, straightforwardness, freedom from covetousness, reverence toward gods and Brahmins (priests), and freedom from anger—Hindus can better their station in future lives. Eventually through meditation or worship of deities like Brahma, Shiva, Vishnu, or the Mother Goddess, any of whom can “short circuit” karma, persons can approach perfection sufficient to gain release.

Latter-day Saints address these problems through the doctrines of the Atonement and eternal progression, but like Hindus, Latter-day Saints cannot ignore that they have come from somewhere—the premortal realm—and are going somewhere after this life. How our premortal behavior influences us in this life is not as clear as the doctrine of karma in Hinduism. While general authorities have spoken of people being blessed and held for the latter days because of their valiance in the pre-existence, Mormons do not believe in such a direct correlation as Hindus do.

The hard things that occur in mortality are the product of living in a fallen world and having to make choices between good and evil—not our actions in a past life. Inevitably, we will make some wrong choices, thus becoming sinners and imperfect, but rather than believing we must live multiple lifetimes to eventually attain perfection, Latter-day Saints believe people can be washed clean through the Atonement of Jesus Christ. Being washed clean in Christ, however, is not the end of the process, and Latter-day Saints continue in the process of eternal progression, moving toward perfection throughout the eternities.

As one Zen master put it, “To come to Self-realization, you must directly experience yourself and the universe as one.” Reality is not captured by thoughts. In enlightenment, a person experiences reality as it is.

Buddhism is the path to release discovered by Siddhartha Gautama. Though he was a prince, after seeing the suffering in the world, he committed himself to finding a cure for it. He lived an ascetic life for five years and came to enlightenment. In his enlightenment, he discovered that life is suffering because of the attachments we form to things that are transitory and impermanent; when we try to hold on to persons, places, or things, we inevitably create pain and suffering for ourselves because they will always slip through our fingers.

While Buddhists do not believe there is a soul that moves from life form to life form, they do believe that if persons have not gained release at death, everything falls apart. Then five new “elements of being” are drawn together and stamped by that individual’s karma, and he or she is reborn. To break this cycle, people must walk a path of moral and spiritual development until through either meditation or the help of enlightened heavenly beings, they break all attachments, thus freeing themselves from the rounds of rebirth.

At first glance, there may not appear to be much in common between Latter-day Saints and Buddhists. Attachment to the things of the world, however, is a problem common to all people.

Billy Graham once said he had never seen a hearse going to the cemetery with a U-Haul trailer behind it. In other words, all the things in which we invest our energy—vocations, sports, activities, pleasures—will matter very little beyond the veil. The only things that Latter-day Saints hold to be permanent are our relationships with God, the intelligence we develop, and our relations with our family. It was no accident that the Savior said, “It is easier for a camel to go through the eye of a needle, than for a rich man to enter into the kingdom of God” (Matthew 19:24). While we can buy anything in this world with money, it will have no value as we enter the presence of God.

Judaism and Latter-day Saint Christianity both focus on how people practice their religion as well as people’s understanding of theological practices.

Members of the Jewish faith understand themselves to hold a special position before God. They are his chosen people, not because they are better than others but because of the mystery of divine election. God chose them to be his special representatives in the world to proclaim the one God and to live in a manner that befits God’s representatives.

As a sign of their chosenness, God gave them at Sinai the Written Law (the five books of Moses, or the Pentateuch) and the Oral Law (scripture passed down from generation to generation and unpacked over time—the rest of the Old Testament and rabbinic commentary) to guide them and to keep them safe. All the commandments, which deal with every area of life, are to remind the Jewish people that they live before God. Perhaps the clearest reminder is the practice of keeping kosher. This means that certain foods are permitted and others are not, and as a result, each time Jewish people eat, they are reminded that they live before God.

Latter-day Saints share a common sense of chosenness, partly because they descend from and share in the covenants made with Adam and Abraham and partly because God has given them the special role of blessing the nations through the gospel they preach. As with the Jewish people, LDS chosenness is not based on superiority but upon the vocation God has given them. It would be fair to say that a sign of that special role is signaled through the restoration of the Aaronic and Melchizedek priesthoods and the giving of a new law in the Doctrine and Covenants. The same Jehovah who gave the old law on Sinai also gave the new law through the prophet Joseph Smith.

Through Joseph, we learn the laws and ordinances of the last days and the priesthood and member roles we are to shoulder. The Lord even gives us dietary laws to keep us vigilant and aware of his sovereignty over us. The Word of Wisdom demands our willingness to be different from the world, as do the kosher laws for Judaism. Thus, there is a straight line running from Adam, through Abraham, through Judaism, to the Restoration in the latter days.

To read the feature story in its entirety, including discussion on Islam, Christianity and Confucianism, find it in the May/June issue of LDS Living. And to learn even more in depth about these religions and others, read Roger Keller's book, Light and Truth: A Latter-day Saint Guide to World Religions.