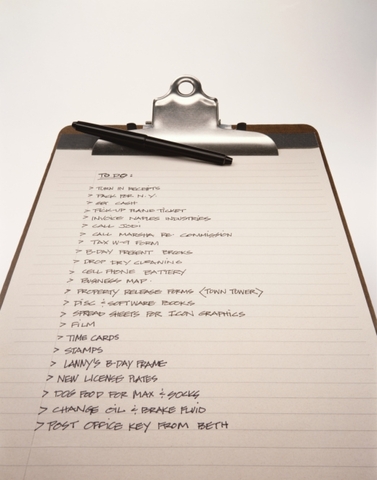 I love lists.  Lists of all kinds...shopping lists, to-do lists, things to accomplish before I turn (insert next milestone birthday here) lists.

I love reading other people's lists and writing them myself.  I like to itemize my lists as there is nothing more fun than separating thoughts with a handy bullet point or number.

Anytime of the year is a good time to write one but if there ever was a season that honored lists more than the others, New Years would be it.  You can't go anywhere this week without seeing year-in-review lists or best-of lists.  Add to that individual new year's resolutions and you can see why a list geek like me is loving the new year.

At LDS Living we got together last week and created four top 10 lists for 2010.  We looked at statistics from our website, did some handy internet searches, and tried to recall all the news from 2010. For the most part we did a good job but I have to admit that sometimes our memory was a wee bit off (turns out Michael Jackson died in 2009, NOT 2010.  Who knew?)

Once we sorted out the top news, stories, and videos...then came the fun part. Fueled by a huge box of See's chocolates, we debated over the significance of stories, re-watched videos (including one that made two of us cry--it's our number 3 pick on the top 10 videos list), and finally decided on the all important order.

Hopefully you have as much fun reading our lists as we had putting them together.  In fact, as far as meetings go I think this was my favorite of 2010. Or maybe it was that one time when we had sweet potato fries at the editorial meeting. Hmmm, I should probably just make a list.