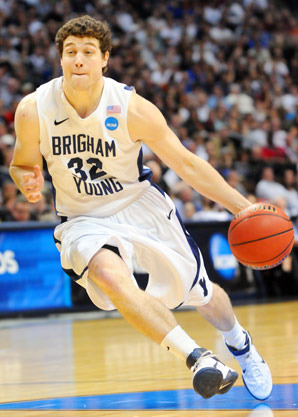 BYU finds itself in an unusual position this week. The Cougars are not only in the Sweet 16 for the first time in 30 years, but also may be on the verge of becoming America's team.

The BYU fans are in New Orleans today for a game against Florida that is a matchup of contrasts on so many levels. (Free marketing idea to potentially frustrated Big Easy establishments: sell alcohol-free Jimmercanes. BYU Nation will buy anything with the word Jimmer attached). And America may be pulling for the Cougars.

It's not just the power of Jimmer Fredette, a player with a name that's fun to say and who gives every average looking, not so tall, not uber-athletic person absurd hopes and dreams. Jimmermania is indeed a seductive power, but that's not BYU's only attraction.

BYU stood up for something, stuck to its guns and its morals, no matter the consequences, when it suspended its second-best player, Brandon Davies, for violating its honor code in early March. Ranked third in the country at the time, and with the NCAA tournament and unprecedented riches and exposure beckoning, BYU chose the non-hypocritical path. And, in this age of college sports, that's so unusual that it's actually shocking. And something that weary sports fans can applaud.
Read the rest of this story at sportsillustrated.cnn.com