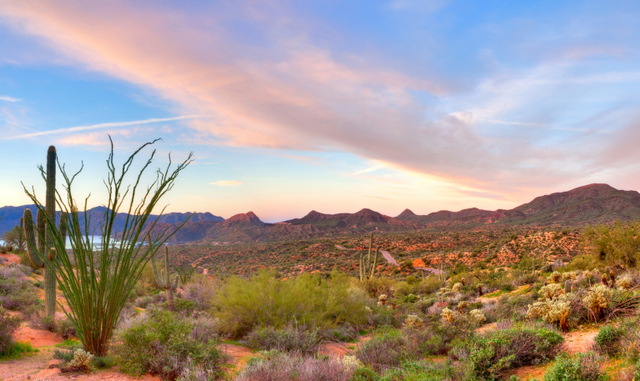 D&C Lesson 36: "The Desert Shall Rejoice and Blossom as the Rose"

INTRODUCTION: Neighbors who lived near my home in a small Arizona town suffered the misfortune of having the foundation of their home crack. The displacement left three- and four-inch gaps between the bricks of the west and north walls. It was a preventable calamity. Everyone knew that the soil was sandy and that the foundation, in order to remain secure, had to rest on bedrock. But in an effort to cut costs and save time, the owner and contractor agreed to shortcuts that led to disaster.

In much the same way that buildings require strong foundations, organizations, families, and lives do also. The Lord spoke of the foundation of the Church several times in the D&C:

And also those to whom these commandments were given, might have power to lay the foundation of this church, and to bring it forth out of obscurity and out of darkness, the only true and living church upon the face of the whole earth, with which I, the Lord, am well pleased, speaking unto the church collectively and not individually. (D&C 1:30)

Wherefore, if you shall build up my church, upon the foundation of my gospel and my rock, the gates of hell shall not prevail against you. (D&C 18:4)

Behold, verily I say unto you, for this cause I have sent you‑that you might be obedient, and that your hearts might be prepared to bear testimony of the things which are to come; And also that you might be honored in laying the foundation, and in bearing record of the land upon which the Zion of God shall stand . . . (D&C 58:6,7)

Wherefore, be not weary in well‑doing, for ye are laying the foundation of a great work. And out of small things proceedeth that which is great. (D&C 64:33)

In order for the Church to meet the expectations of the Lord, its foundation had to be absolutely solid. The account of the settling of the Great Basin and the building of the great temple and taking the gospel to the world show us a people wholly engrossed in that responsibility.

1. “RIGHT HERE WILL STAND THE TEMPLE OF OUR GOD”

Verily I say unto you, that it is my will that a house should be built unto me in the land of Zion, like unto the pattern which I have given you. Yea, let it be built speedily, by the tithing of my people. Behold, this is the tithing and the sacrifice which I, the Lord, require at their hands, that there may be a house built unto me for the salvation of Zion. (D&C 97:10-12)

Less than a year after the arrival of the Saints in Illinois, and just months after Joseph had moved to what was then called Commerce on May 10, 1839, the Lord spoke again:

Brigham Young learned from these experiences and from the inspiration of the Spirit that as the Saints gathered to the mountains and built homes for themselves, it was imperative that they invite the Lord to come and dwell among them. Brigham had been sick during the final days of the journey, but the day after the arrival at the valley, he went for a walk:

The next morning he and the Twelve who came with him took a walk. He had been quite feeble, but he was then able to walk with the assistance of his staff. We walked along until we came to this Temple Block. It was covered with sagebrush. There was no mark to indicate that God ever intended to place anything there. But while walking along Brother Brigham stopped very suddenly. He stuck his cane in the ground and said, “Right here will stand the great Temple of our God.” We drove a stake in the place indicated by him, and that particular spot is situated in the middle of the Temple site. (Wilford Woodruff, Collected Discourses, Vol. 5, delivered on April 6, 1992)

I have determined, by the help of the Lord and this people, to build him a house. You may ask, “Will he dwell in it?” He may do just as he pleases; it is not my prerogative to dictate to the Lord. But we will build him a house, that, if he pleases to pay us a visit, he may have a place to dwell in, or if he should send any of his servants, we may have suitable accommodations for them. I have built myself a house, and the most of you have done the same, and now, shall we not build the Lord a house? (JD, vol.1, p. 376)

There has arisen a great longing in the Church to have temples closer to the people. The effort of the prophets to place temples throughout the earth so that the people may have the blessings of a House of the Lord has been one of the great miracles of recent decades. And our prophets have always known how important this was. President Young foresaw a day when temples would cover the earth:

To accomplish this work there will have to be not only one temple, but thousands of them, and thousands and tens of thousands of men and women will go into those temples and officiate for people who have lived as far back as the Lord shall reveal. (JD, vol. 3, p. 372.)

2. SAINTS WERE OBEDIENT AS THEY SETTLED AND COLONIZED THE SALT LAKE VALLEY AND THE SURROUNDING AREAS

Between 1847 and 1877, Church members established 349 communities under the direction of the Prophet. As always in the kingdom, the calls to participate in this expansion and settlement were received in a manner dictated by the faith of the recipients. People were called to such places as Colonia Dublan in Mexico, to Raymond and Cardston in Canada, to Snowflake in Arizona and Las Vegas in Nevada, to Lovell in Wyoming, to Rupert in Idaho, to San Bernardino in California, to Legrande in Washington, and to Kirtland in New Mexico. And they went. Obedient to the requirement of their covenants and to the direction of a just and loving God, many of them once again set off to make new homes. Someone has said that Brigham desired to “have a settlement on every stream large enough to provide the source for permanent agricultural community.” (T. Edgar Lyon: July 1970 Improvement Era, “Mormon Colonization of the Far West” page 13)

My grandfather on my father’s side was always willing to go where he was sent, and always with a pouch of fruit seeds. In the family, we refer to him as the "Mormon Johnny Appleseed." He planted nine orchards before he stayed in one place (St. Johns, Arizona) long enough to eat his own fruit.

What would your attitude have been if you had been called to leave the Salt Lake Valley in those years of expansion? If you had endured the apostasy of Kirtland, the animosity of Missouri, the martyrdoms of Illinois, the trek to Winter Quarters and then finally to Utah, if you had been called to go on to a new and unsettled location, how would you have responded? Read the words of the first verse of Hymn #270:

It may not be on the mountain height

Or over the stormy sea,

It may not be at the battle's front

My Lord will have need of me.

But if, by a still, small voice he calls

To paths that I do not know

I'll answer, dear Lord, with my hand in thine:

I'll go where you want me to go.

I'll go where you want me to go, dear Lord,

Over mountain or plain or sea;

I'll say what you want me to say, dear Lord;

I'll be what you want me to be.

3. MISSIONARIES MADE SACRIFICES TO TEACH THE GOSPEL THROUGHOUT THE WORLD.

As an example of the sacrifices made by early missionaries, consider the following historical vignette, written as a readers’ theatre and based on a true story.

BISHOP: Richard Benson was born at Wrightington, England, in 1816, and he died at Center Creek in 1895. Weep not; he is at rest.

He was baptized in England by Heber C. Kimball, who sent him on a mission to New Castle upon Tyne. Richard baptized forty‑seven people there, including Phoebe. Later, from Nauvoo, he answered another call to England. That time he married Phoebe and brought her to Great Salt Lake. But they’d scarcely got comfortable when Brother Brigham called them to settle Center Creek—another 250 miles into the wilderness. I knew Brother Benson. He loved the Lord and went where he was called. . . .

RICHARD BENSON: April 1866, I went to conference, fifteen days by wagon down to Great Salt Lake. There, in God’s Tabernacle, I gathered with the Saints. I heard my name called out by Heber C. Kimball.

BISHOP: Later, Richard had a little conversation with Brother Heber.

HEBER C. KIMBALL: When will it be convenient, Elder Benson, for you to leave?

RICHARD BENSON: Why, Brother Kimball, I must go home and talk with Phoebe.

HEBER C. KIMBALL: Why, Richard, that would waste a month.

RICHARD BENSON: Well, there’s the crops to put in, plowing and planting, and wood to haul against next winter, and the winter after that, for Phoebe and the children.

HEBER C. KIMBALL: I know Phoebe, Richard. She’ll do without you. I’ll tell your bishop to say your goodbyes and watch out for your family. The caravan leaves day after tomorrow for the Missouri. God bless you, Elder Benson. Bring back some miners and millwrights and masons—men of skill and faith to help us build up Zion.

RICHARD BENSON: Why did I go—not even turning back to say goodbye to Phoebe? Because I, too, knew Phoebe. To her, Heber C. Kimball, who baptized me, is still God’s servant. And when Brother Kimball says to a man, “Go,” behold, he goeth.

PHOEBE BENSON: How did I feel when the bishop stood in my doorway and said—

BISHOP: Your husband, Phoebe, your husband is on his way back across the plains called on a mission to England.

BISHOP: Tell you what, Sister Benson?

PHOEBE BENSON: I looked at my children, their faces staring blankly from the bishop to me. I know what my husband would have told me, and I know what I would have told him. We both know you must go where the Lord calls. Yet, why on earth! He could have at least come home!

No, if he’s going—he’ll be back four weeks sooner. They always said I could make a silk purse out of a sow’s ear. That’s what I had to do, day after day for 720 days. And sometimes there was not even a sow’s ear, although my silk purse grew to look like one. And the work was mine, inside and out, and all the bills, and the care and correction of our children were mine. And when there was sickness, croup, cholera, or smallpox, the cry in the night was for me, always me.

But somehow the pennies stretched, the wood burned longer, the wheat dwindled slowly. We pieced and patched as we peeled off the calendar’s 720 sheets to 126,144,000 tickings of the mantel clock. And then at last our husband and father stood in the door. We know the joy that awaits those who go where the Lord wants them to go. (“An Evening of Historical Vignettes,” Ensign, Oct. 1972, 89-90)

CONCLUSION: Think about the trials of the Saints who settled the Rockies and of the trials they faced as they laid the foundation on which we have built. They began their travels from New York to Ohio in January and February; out of Jackson County in November and December; from Kirtland to Missouri in December; from Missouri to Nauvoo in November and December; and from Nauvoo to the West in February. It was this kind of commitment that the Lord needed to lay the foundation for this latter-day work and to make the desert blossom as a rose.