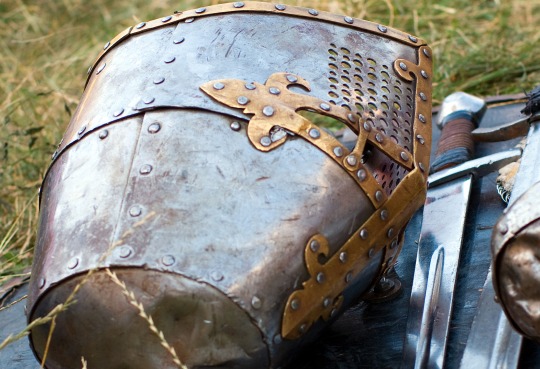 If we are not clothed completely in the armor of God, the fiery darts of the adversary will penetrate our defenses, and we will be wounded often. We may even be fatally wounded.

We need to understand that just like times of old, we are at war. D&C 76:29 tells us that Satan “maketh war with the saints of God and encompasseth them round about” (D&C 76:29).

In Revelation 12 and 13, John had a vision of a woman, a child, and a great red dragon. We are told in 12:7, JST, that the woman is the church. In 12:17, JST tells us that “the dragon [Satan] was wroth with the woman, and went to make war with the remnant of her seed, which keep the commandments of God, and have the testimony of Jesus Christ.”

The point is that we too are at war, with a being of malignant power and bitter hatred who wants to devour us, to destroy us, to make us miserable. What a tragedy it would be if we went into battle like the Lamanites, who “were naked, save it were a skin which was girded about their loins” (Alma 43:20; see also 43:19)

Stand, therefore, having your loins girt about with truth, having on the breastplate of righteousness, and your feet shod with the preparation of the gospel of peace, which I have sent mine angels to commit unto you;

Taking the shield of faith wherewith ye shall be able to quench all the fiery darts of the wicked;

And take the helmet of salvation, and the sword of my Spirit, which I will pour out upon you, and my word which I reveal unto you, and be agreed as touching all things whatsoever ye ask of me, and be faithful until I come, and ye shall be caught up, that where I am ye shall be also. Amen. (D&C 27:15-18)

Both here in the D&C and in Ephesians 6:13-17 where this message is repeated, the Lord specifies that we take up the whole armor. A section or two will not suffice. Almost all the armor will not do. We must take the whole armor in order to withstand the evil of our day.

This lesson focuses on three areas in which gaps in the sections in our armor may be particularly difficult: chastity, honesty, and language.

2. LIVE THE LAW OF CHASTITY.

The Lord has not left us in doubt about his will in the matter of chastity. From the destruction of Sodom and Gomorrah to the inspired declarations of our own prophetic leaders, we have been taught clearly what his will is in this matter. We have been warned against any expression of sexual relations outside the bonds of marriage.

Mostly these problems begin with kissing. President Kimball spoke plainly on this matter:

When young people begin to date, the temptations increase profoundly. Hollywood would have us believe that even young romances, once so innocent and awkward, must be consummated with a kiss. And the kind of kisses that we often see in movies are intended to arouse sexual feelings.

“Kissing has been prostituted and has been degenerated to develop lust instead of affection, honor, and admiration,” said President Kimball. “To kiss in casual dating is asking for trouble.”

What is miscalled the soul kiss is an abomination and stirs passion that results in the eventual loss of virtue. Even if timely courtship justifies a kiss, it should be a clean, decent, sexless one.  If the soul kiss with its passion were eliminated from dating, there would be an immediate upswing in chastity and honor, with fewer illegitimate babies, fewer unwed mothers, fewer forced marriages, and fewer unhappy souls. With the absence of the soul kiss, necking would be greatly reduced. Its younger sister, petting, would be totally eliminated. Both are abominations of their own right and kind. (In Conference Report, Sydney Australia Area Conference, 29 Feb. 1976, p. 55.)

Even people not of our faith have noticed the great emphasis that has been placed on immorality in our culture. “A consuming interest in sex has so penetrated our national culture that it has been estimated we encounter some kind of sexual lure every nine minutes of our waking day.” (Dr. Pitirim A. Sorokin: Time Magazine, 11 Jan. 1954)

Dr. Sorokin made the statement above in 1954! My guess that is that it has taken over even more corners since them.

“A lie is any communication given to another with the intent to deceive.” So taught Elder Marvin J. Ashton in the April 1982 General Conference. This little insight has stayed with me now for over 30 years. It is a powerful and clear lesson on honesty.

If you are like me, you have developed some feelings about this. I tend to be doubtful about warranties and guaranties and commercial commitments of every kind.

But I have had joy in meeting people who are utterly reliable, people in whom I can place the utmost confidence. Such people are becoming like the Father and the Son. The brother of Jared, Mahonri Moriancumer, said of God, “I know that thou speakest the truth, for thou art a God of truth, and canst not lie” (Ether 3:12). Enos said, “And I, Enos, knew that God could not lie” (Enos 1:6).

Moses 4 tells us that it happened in the pre-mortal life. When Lucifer was cast down, “he became Satan, yea, even the devil, the father of all lies, to deceive and to blind men” (Moses 4:4).

There are no lies that do not matter. Any dishonesty is service to Satan and supports his plan for making all men miserable (see 2 Nephi 2:18,27).

4. USE LANGUAGE THAT REVERENCES GOD AND IS EDIFYING.

How often have you heard the following word: (think phonetically) NAYMCHEEZKRYSTAYMIN? I have been troubled by how often I hear it at the end of prayers and testimonies. In D&C 63:61-63, the Lord warns

Wherefore, let all men beware how they take my name in their lips—

For behold, verily I say, that many there be who are under this condemnation, who use the name of the Lord, and use it in vain, having not authority.

Wherefore, let the church repent of their sins, and I, the Lord, will own them; otherwise they shall be cut off.

The actual language of the Ten Commandments does not refer to swearing, that is, profanity, but to this very principle: “Thou shalt not take the name of the Lord thy God in vain” (Ex. 20:7).

We must speak Christ's name in our prayers with belief and faith. We must speak it with the utmost reverence and the deepest gratitude. With what other perspective could we possibly approach God the Father and appeal to him in the name of his Only Begotten Son, in whom he is well pleased? Elder Packer referred to the name of Christ as the ultimate statement of authority.

I certify to you that Jesus is the Christ. I know Him. He presides over this Church. He is no stranger to His servants here. I invoke His blessing upon all of you, all of us who are teachers, and do so invoking that ultimate statement of authority, in the name of Jesus Christ, amen. (An Evening with President Boyd K. Packer, Feb. 29, 2008)

There is another dimension to inappropriate language. Elder Packer spoke of it.

A number of years ago I went with a brother to tow in a wrecked car. It had been a single car accident, and the car was demolished. . . .

The next morning he came asking for his car, anxious to be on his way. When he was shown the wreckage, his pent‑up emotions and disappointment, sharpened perhaps by his misfortune, exploded in a long stream of profanity. So obscene and biting were his words that they exposed years of practice with profanity. His words were heard by other customers, among them women, and must have touched their ears like acid.

One of my brothers crawled from beneath the car where he had been working with a large wrench. He too was upset, and with threatening gestures of the wrench (mechanics will know that a 16‑inch crescent wrench is a formidable weapon), he ordered him off the premises. ’We dont have to listen to that kind of language here,’ he said. And the customer left, cursing more obscenely than before.

Much later in the day he reappeared. Subdued, penitent, and avoiding everyone else, he found my brother.

“I have been in the hotel room all day,” he said, “lying on the bed, tormented. I can’t tell you how utterly ashamed I am for what happened this morning. My conduct was inexcusable. I have been trying to think of some justification, and I can think of only one thing: In all my life, never, not once, have I been told that my language was not acceptable. I have always talked that way. You were the first one who ever told me that my language was out of order.”

Isn’t it interesting that a man could grow to maturity, the victim of such a vile habit, and never meet a protest? How tolerant we have become!” (Boyd K. Packer, “The Clean Voice of Youth,” New Era, Jan. 1976, 5).

We ought to be intent on using the kind of language that pleases the Lord:

He that speaketh, whose spirit is contrite, whose language is meek and edifieth, the same is of God if he obey mine ordinances. (D&C 62:16)

Cease drunkenness; and let your words tend to edifying one another. (D&C 136:24)

But as he which hath called you is holy, so be ye holy in all manner of conversation. (1 Peter 1:15)

And the members shall manifest before the church, and also before the elders, by a godly walk and conversation, that they are worthy of it, that there may be works and faith agreeable to the holy scriptures—walking in holiness before the Lord. (D&C 20:69)

Much, much more could be said about the war for the souls of men and the whole armor of God. The war on the earth began in the days of Adam, continued down through the years with Moses and the children of Israel, and still rages in a dispensation known as the fulness of timesa dispensation ushered in by the revelations received through the Prophet Joseph Smith. Hence, the issue of protective coverings enabling us to withstand the fiery darts of Satan will continue to be of great significance.

We must put on the armor of God spoken of by the Apostle Paul and reiterated in a modern revelation (see D&C 27:1518). We must also put on the armor of righteousness (2 Ne. 1:23) symbolized by the temple garment. Otherwise, we may lose the war and perish” (Carlos E. Asay, “The Temple Garment: ‘An Outward Expression of an Inward Commitment,’” Ensign, Aug. 1997, 20-21).