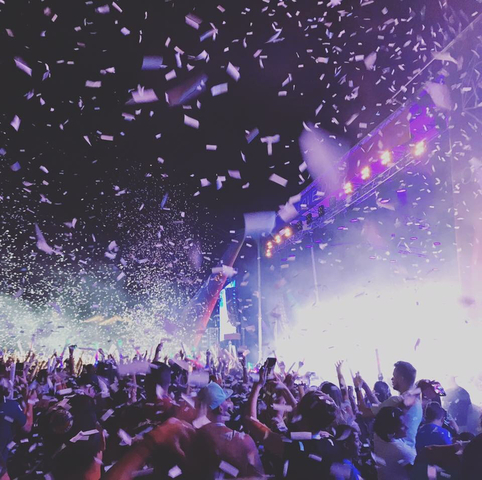 "We stand united tonight for our LGBTQ youth," lead singer of the band Imagine Dragons Dan Reynolds said while looking across more than 17,000 people gathered at the Brent Brown Ballpark for the LoveLoud Festival on Saturday. "We love you; we stand with you; we accept you for all that is. Please, feel our love tonight; we celebrate you."

The festival, which was an unprecedented gathering of the religious and LGBTQ community in Orem, Utah, was the brainchild of Latter-day Saint Dan Reynolds in an effort to "help ignite the relevant and vital conversation of what it means to unconditionally love, understand, accept, and support LGBTQ+ youth in an effort to keep families together" and "to create support and resources for those in crisis," according to the LoveLoud website.

Featuring charities like The Trevor Project, GLAAD, Encircle, and Stand4kind, the festival gained the support of the LDS Church:

“We applaud the LoveLoud Festival for LGBTQ Youth’s aim to bring people together to address teen safety and to express respect and love for all of God’s children," the Church said in an official statement about the festival. "We join our voice with all who come together to foster a community of inclusion in which no one is mistreated because of who they are or what they believe.

“We share common beliefs, among them the pricelessness of our youth and the value of families. We earnestly hope this festival and other related efforts can build respectful communication, better understanding, and civility as we all learn from each other.”

With featured performances and support from the Neon Trees, Krewella, Nicholas Petricca from Walk the Moon, Joshua James, and Aja Volkman, the festival also gained the support of those in the LGBTQ community, including Tyler Glenn.

In a particular demonstration of both communities' support, Glenn, the openly gay lead singer for Neon Trees, and Reynolds joined each other on stage for a performance of the LDS Primary song "I'll Walk with You," sung for the LGBTQ youth.

The self-described "Robin to her Batman," Steve credited his wife, Barbara as being the "glue" for the event as she worked to help bring everything together. Steve Young also said that LoveLoud reminded him of Elder Jeffrey R. Holland's April 2017 general conference talk "Songs Sung and Unsung," a talk in which Elder Holland says there is a place for those with same-sex attraction within the Chruch.

"I believe LoveLoud is one fulfillment of that call to all of us," Steve said. "We need our LGBTQ kids to be seen in love."

Dan Reynolds, who opened up about losing someone close to him to suicide in Provo, Utah, shared how important this event was to him personally.

"I pray, I hope not one more youth feels the need or desire to ever be taking their life," Reynolds said, speaking to the LGBTQ youth. "We love you, we love you; please, your life is priceless. Stay with us. . . We need you."

With so many gathered in support of LGBTQ youth from various faiths and the LGBTQ community, Reynolds promised this event would continue on, and the power of so many united together despite differences was even an answer of prayer to some.

"Tonight represents an answer of prayers of mine," brother of Elder D. Todd Christofferson and member of the LGBTQ community Tom Christofferson said, taking in all those gathered on Saturday. "I wanted my LDS tribe to love and accept, to welcome and embrace my LGBTQ tribe. And I wanted my gay tribe, all of my LGBTQ brothers and sisters, to love and sing gifts and goodness with all my LDS tribe. . . . My heart is full to see you here together tonight. May this be a new beginning for all of us that this community may hereafter be known as a place of love for all."