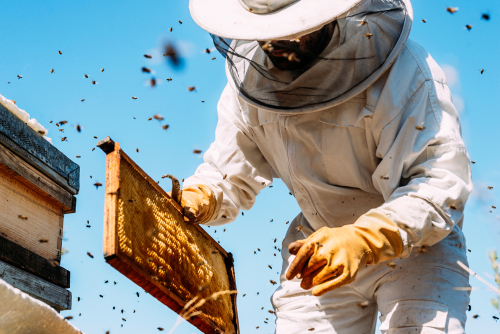 Daniel Peterson: How Recent Findings on Beekeeping in Ancient America Relate to the Book of Mormon

The Book of Mormon mentions bees or beekeeping but only twice. The first reference, in 2 Nephi 17:18, occurs in a quotation from the Old World prophet Isaiah. The second, however, concerns the Book of Mormon’s own early Jaredites: "And they did also carry with them deseret, which, by interpretation, is a honey bee; and thus they did carry with them swarms of bees” (Ether 2:3).

Even in the latter case, though, the verse describes the Jaredites before their voyage across the ocean to the New World. It doesn’t tell us whether they took bees with them to the Americas, although they surely could have.

However, a few critics of the Restoration have seen the Book of Mormon’s mention of bees as an anachronism, and thus as an argument against its authenticity as an authentic historical record of Precolumbian America.

They shouldn’t. Ancient beekeeping and honey production are documented in both the eastern and western hemispheres.

Discussions of premodern apiculture are easily found. In 2008, for instance, an article by Ronan James Head appeared in the FARMS Review under the title “A Brief Survey of Ancient Near Eastern Beekeeping” (see publications.mi.byu.edu/publications/review/20/1/S00004-5176a49a3b18a5Head.pdf). Another brief article on the subject was published in the Deseret News in 2010, titled “Ancient beekeeping and the Book of Mormon” (see deseretnews.com/article/700040886/Ancient-beekeeping-and-the-Book-of-Mormon.html). Moroever, FairMormon also published a relevant essay, called “Bees in the Book of Mormon” (see www.fairmormon.org/answers/Book_of_Mormon/Animals/Bees).

And now four non-Latter-day Saint European researchers have recently published an article titled "The Discovery of a Beehive and the Identification of Apiaries among the Ancient Maya," in the journal “Latin American Antiquity” 29/3 (September 2018): 514-531 (https://www.academia.edu/37419837/). In the abstract to their article, they write:

“Recently, an exceptional find was made by the Nakum Archaeological Project in an offering deposited deep within the architectural core of the Precolumbian Maya site of Nakum located in northeastern Guatemala. The form of the object and comparisons made to ethnographic analogs indicate that it is a clay beehive, most probably one of the oldest in the Maya area and in the whole of Mesoamerica. Whether the object was used for its intended function or is an emulation, or skeuomorph, of perishable counterparts, remains unknown. The importance of this find lies in the fact that beekeeping is an activity that is traced with difficulty in archaeology. The present paper discusses the discovery of this artifact at Nakum, which dates to the end of the Preclassic period (ca. 100 B.C. – A.D. 250/300), in a wider temporal and spatial context and provides new data on Precolumbian beekeeping. We use a broad comparative vantage, drawing on archaeological, epigraphic, and ethnohistorical sources to discuss Mesoamerican beekeeping and its role in both the daily and the ritual lives of the Maya.”

Plainly, this article is about neither the Book of Mormon’s Jaredites nor even their era, although it regards a time in the ancient Americas well before the arrival of Columbus. Moreover, as noted above, the Book of Mormon never actually refers to American beekeeping.

Does such new evidence prove the Book of Mormon true? Of course not. (One critic caricatures the Latter-day Saint “apologetic” argument as follows: The Book of Mormon describes rivers. There are rivers in America. Therefore, Joseph Smith was a true prophet!) Nonetheless, such evidence can be at least slightly useful in countering misguided attacks on the book’s credibility and, thus, in defending the claims of Joseph Smith and the Restoration. (If the Book of Mormon described American rivers and, in fact, there weren’t any, that would be a problem.)

But we’re not quite done with the Book of Mormon’s bees yet. As mentioned above, Ether 2:3 uses the term “deseret” in reference to the honeybee. Here, a positive argument — one that isn’t merely defensive but that actually affirms the historical authenticity of the Book of Mormon — can be, and has been, made:

In late 2016, the staff of Book of Mormon Central published a helpful and clear summary of that argument: “Where Does the Word ‘Deseret’ Come From?” (https://knowhy.bookofmormoncentral.org/knowhy/where-does-the-word-deseret-come-from).

It’s not, perhaps, of huge importance and it’s certainly not an all-conquering “slam dunk,” but it advances the case for the historical plausibility of the Book of Mormon at least a little bit. Overall, too, the discussion about bees and the Book of Mormon serves to illustrate something of the nature of the piecemeal, cumulative case that scholarly advocates of the Book of Mormon seek to set forth, both defending the book against criticisms and demonstrating its credibility.