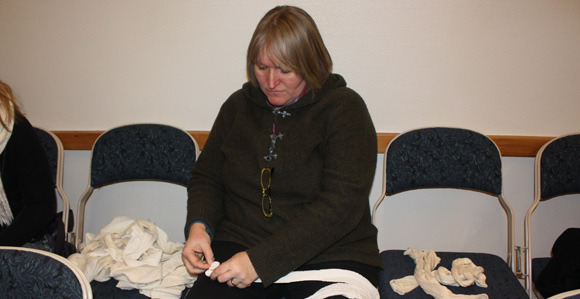 isbeth Bach Sørensen knows what it means to be “anxiously engaged in a good cause” (D&C 58:27).

The healthcare worker, a member of the Roskilde Ward in the Copenhagen Denmark Stake, has been volunteering her time helping the poor in Uganda since 1994, often by meeting critical medical needs. She pays for her own airfare to the African county, where she travels two to three times each year as an independent humanitarian worker, because she believes that all of humanity are Heavenly Father’s children.

With Sister Sørensen’s projects have come the opportunity for others to be engaged in good causes too. Since 2011, members of her stake have helped with her various relief projects, and this year, the Relief Society presidency in the Gladsaxe Second Ward approached her about volunteering. They decided to help people with leprosy by collecting elastic bandages to cover the open wounds that the disease causes.