MR says: Caught in the middle of a brutal civil war, eight Liberian missionaries in Monrovia fled the widespread violence of their native country, escaping to a refugee camp in Freetown, Sierra Leone. With the help of local church leaders, the missionaries made the difficult journey, experiencing many miracles and tender mercies that aided in their survival.

One of the eight missionaries was Elder Joseph Suko Myers, who was a zone leader.  His daughter, Josephine, is one of [the] missionaries [at the Ghana MTC] and has been [preparing to serve in the Ivory Coast] for the past month learning to speak French.

She was raised in the Church [and is] very familiar with her dad's story.  Elder Myers joined the Church in Liberia while in high school and immediately prepared to serve a mission.  While serving in Liberia, the war broke out and he and five other elders escaped to Sierra Leone. When his daughter Josephine was growing up, he and his wife took the children to the apartment from which he escaped.

Here is their story as written . . . by Elizabeth Maki:

The LDS Church was still in its infancy in Liberia when civil war erupted in the West African nation, threatening members and branches and devastating an entire country.
When the war broke out in late 1989, eight native Liberian missionaries were serving in the country. 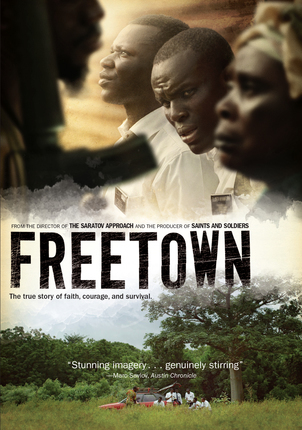 Own the movie that was inspired by this incredible true story, Freetown.

Read the rest of this story at ghanamtc.blogspot.com