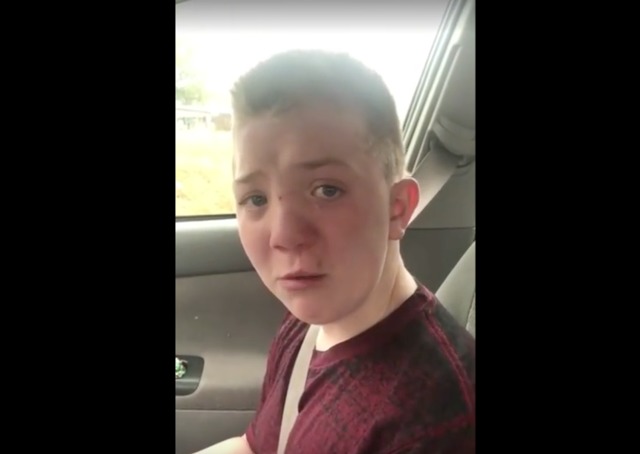 In a video that has gone viral on social media and garnered the attention of celebrities and sports stars, Keaton Jones, a middle school boy from Tennesse, shared his heartbreaking experience with bullying at school. His mother posted the video on Friday, and it has already received more than 22 million views.

In the video, Keaton shares that bullies at school poured milk on him, put ham down his clothes and threw bread at him, on top of making fun of his nose and calling him ugly. In the video, Keaton pleads, "It's not okay. . . people that are different don't need to be criticized about it."

Today, David Archuleta joined many other celebrities and sports stars, including Chris Evans, Snoop Dogg, and Katy Perry, in tweeting messages of support for Keaton.

In addition to messages of support, Keaton has been offered to attend movie premieres and sports events with various celebrities and sports stars, and some have even offered to walk him to school or to talk to his bullies themselves.

Wow, what a testament against bullying. Thank you Keaton for fighting with kindness. I hope we can all do the same. And as for bullying: Stop it. #standwithkeaton#StopBullyinghttps://t.co/oBgVbRiQjg — David Archuleta (@DavidArchie) December 11, 2017

Stay strong, Keaton. Don’t let them make you turn cold. I promise it gets better. While those punks at your school are deciding what kind of people they want to be in this world, how would you and your mom like to come to the Avengers premiere in LA next year? https://t.co/s1QwCQ3toi

This broke my :broken_heart: today. Please be kind to one another. #standwithkeatonhttps://t.co/8XBbFmnuc1 — KATY PERRY (@katyperry) December 10, 2017

buddy next time I make it home to Knox I'm going to walk into that lunchroom with you and watch the bullies say they are sorry to you. you don't deserve that. keep your head up and continue to be kind...you will always Come out on top. sending a hug. https://t.co/fZn2hbMPKp

So I got the chance to spend the day with my new best bud Keaton. It was unbelievable to get to know him and realize that we have a lot in common. This dude is very special and has changed my life forever. Now I have the little brother I always wanted! God bless you my man pic.twitter.com/vMHVtnf2rC — Jarrett Guarantano✞ (@BroadwayJay2) December 11, 2017