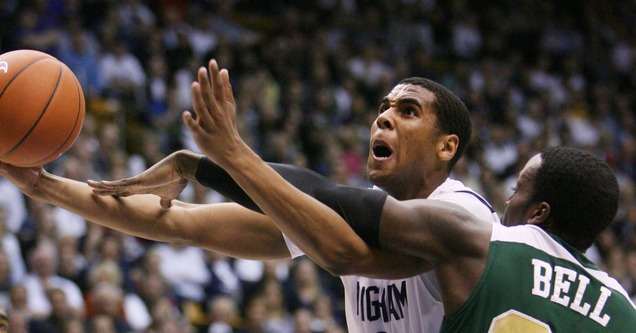 Three days after recording the biggest regular-season win in program history, a win over San Diego State that propelled the BYU basketball team to a No. 3 national ranking and into serious consideration for a No. 1 seed in the NCAA Tournament, the Cougars’ postseason hopes were dealt a devastating blow.

Starting center Brandon Davies was dismissed from the team on Tuesday because he ran afoul of the school’s strict honor code.

BYU announced in a terse news release that Davies, a 6-foot-9 sophomore from Provo High, “will not represent the university on the men’s basketball team throughout the remainder of the 2010-11 season” because of a “violation of the BYU Honor Code.”

Among other things, the code forbids premarital sex, the use of alcohol and illegal drugs, and cheating on schoolwork.

School spokeswoman Carri Jenkins said Tuesday night that the school does not release details regarding violations of the code. She said the Honor Code Office of the university owned and operated by The Church of Jesus Christ of Latter-day Saints became aware of the violation on Monday and that a review is under way.