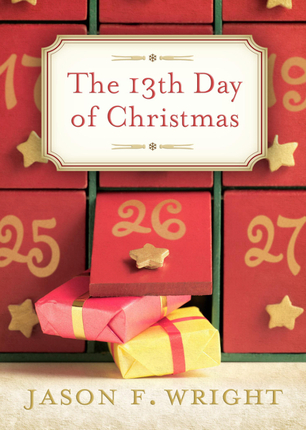 Go to the previous day.

One of the best parts of the holidays is getting to read a heartwarming new Christmas book. Here are the books we’ll be reading this holiday season:

The Thirteenth Day of Christmas
Jason F. Wright
$17.99
The New York Times bestselling author Jason F. Wright (author of The Christmas Jars) brings a new tender Christmas tale of eight-year-old Charlee and her best friend, Marva, a 90-year-old widow: both of whom are diagnosed with cancer. When strange gifts begin appearing on Charlee’s front doorstep thirteen days before Christmas, Charlee and Marva are determined to solve the mystery of the thirteenth day of Christmas.

The Christmas Bus
Melody Carlson
$6.00
The people of Christmas Valley always celebrate Christmas to the fullest extent. But this year nothing goes according to plan. Shepherd's Inn is full of strangers, Mad Myrtle is causing problems, and a young couple with a baby due any minute rolls in to the middle of town in their Partridge Family-style bus. It's hardly the holiday Christmas Valley wanted—but it may be just what they need.

The Christmas Train
Thomas S. Monson; Illustrated by Dan Burr
$18.99
You may have heard President Monson tell this Christmas story from his childhood before, and now it comes with beautiful illustrations to match the uplifting story. President Monson tells of how as a boy he was delighted on Christmas morning to get his very own electric train. Then he noticed a second train with a beautiful oil tanker car that he wanted desperately—but that his mother had purchased for the boy down the street. You can also buy the app version for your Ipad, where kids can navigate trains, turn on Christmas lights, and listen to the story narrated by President Monson!

The great novelist Charles Dickens wrote this article, never published during his lifetime, to teach his children about the life of Christ. Richly illustrated by renowned artist Simon Dewey, this 200th anniversary limited edition volume features more than twenty memorable scenes from the life of Christ.

The Christmas Wish
Richard Siddoway
The warm memories of old-fashioned Christmas holidays spent with his grandparents still sustain Will as a young man making his way in the world. When Will returns home to help run the family business, however, he discovers something shattering about his late grandfather’s past. Each Christmas Eve, his grandfather went to see a woman named Lillian. As Will learns the truth about Lillian, he also learns a powerful lesson of kindness, forgiveness, and love.

Good King Wenceslas
Retold by Jane Seymour; Illustrated by Omar Rayyan
$21.99
This beloved Christmas carol is brought to life by actress Jane Seymour and artist Omar Rayyan. The sumptuous illustrations reflect the medieval, Bohemian setting as a king and his faithful page venture out to deliver food and comfort to a peasant family. Plus, the book includes a DVD featuring the Mormon Tabernacle Choir’s performance from last Christmas!

The Christmas of ’45
Author: Mills Crenshaw
$10.19
It’s Christmas Eve, 1945. The war has just ended and the nation is excitedly preparing to celebrate its first post-war Christmas. While others are caught up in the holiday euphoria, a little boy mourns the loss of his mother. Well-meaning adults have told him, “She has gone to live with Jesus.” Taking them at their word, he sets out to find the Savior to plead for his mother’s return. Many lives are touched and people of different backgrounds are brought together by the little boy who pursues his quest in the face of a brutal snow storm.

The Fourth Gift
J. Tucker Davis
$11.04
Jeshua is only a lowly beggar boy, but there must be something he could give the King of Kings. In this story of the first Christmas, the message is that everyone has something to offer and that the best gifts are those given from the heart.

Go to the next day.