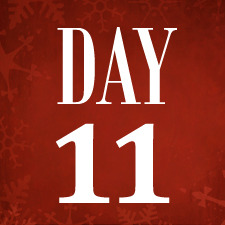 Day 11: Holiday Drinks for Everyone

Spice up your holiday mixer with one of these festive drinks!

Aztec hot chocolate, brown sugar hot cocoa, cold chocolate eggnog--drooling yet? Warm up with one of these 10 yummy recipes.

Wassail is a warm drink made during the holiday season that was made popular in England. The word “wassail” is derived from the Old Norse word “vesheill,” which means “be in good health.” So when a person toasts a friend with a cup of wassail, they are actually toasting their health.

In England, groups of Christmas carolers would go a-wassailing, meaning they would travel from house to house caroling their hosts in return for a cup of wassail.

What’s in a name?
There are differing opinions as to the origin of the name for this famous drink. One version attributes the name to Colonial America where colonists referred to thick drinks as “grog” and eggnog as “egg-and-grog”. However, the thought of drinking egg does not sound very appealing to most, and that is why eggnog sometimes gets a bad rap.

A concoction of sorts
There many variations of ingredients included in eggnog. These variations are often influenced by geographical region. For instance, immigrants traveling across the Atlantic to the English colonies during the 18th century brought their own appreciation of eggnog with them. And Americans began to adapt the recipe to local tastes. So, homemade eggnog in the South is much different than eggnog made in the Midwest.

2. Add salt to egg whites and beat until they stand in peaks. Fold into egg yolk mixture.

3. Serve in punch cups. Sprinkle each serving with nutmeg.

For this month’s visiting/home teaching, share a message of Christ and a mug full of delicious hot chocolate. Here’s a great quote from President Hinckley:

"Christmas is more than trees and twinkling lights, more than toys and gifts and baubles of a hundred varieties. It is love. It is the love of the Son of God for all mankind. It reaches out beyond our power to comprehend. It is magnificent and beautiful." ("A Season for Gratitude," Ensign, Dec. 1997, 2)

Chocolate-Bar Hot Chocolate
Combine the chocolate and milk in a medium saucepan. Heat over medium heat, whisking often until chocolate has melted, about 5 minutes. Whisk the mixture to combine well. Serve hot with one candy cane in each mug.

Recipe from Christmas with Martha Stewart Living: Parties and Projects for the Holidays.