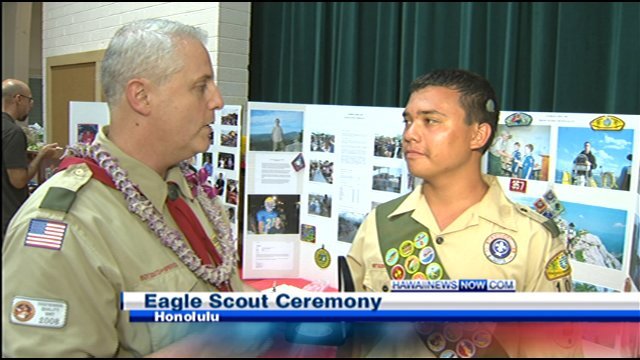 A high school senior is the first deaf scout in Hawaii to earn the rank of Eagle Scout. Joshua Salomon received his court of honor on Wednesday at the Church of Jesus Christ of Latter-day Saints in Kahala from the Aloha Council and Hawaii Troop 108.

Earning the Eagle Scout rank is the highest advancement rank in boy scouting. According to the Boy Scouts of America, in 2009 about five percent of all boy scouts earned the prestigious rank. Some of the requirements include earning 21 merits badges, serving as a troop leader and completing an Eagle Scout board review.

Joshua's parents, Al and Kathie Saloman said that they started him in Tiger Scouts on the Big Island around the age of six because they wanted him to be involved in something positive.
Read the rest of this story at hawaiinewsnow.com