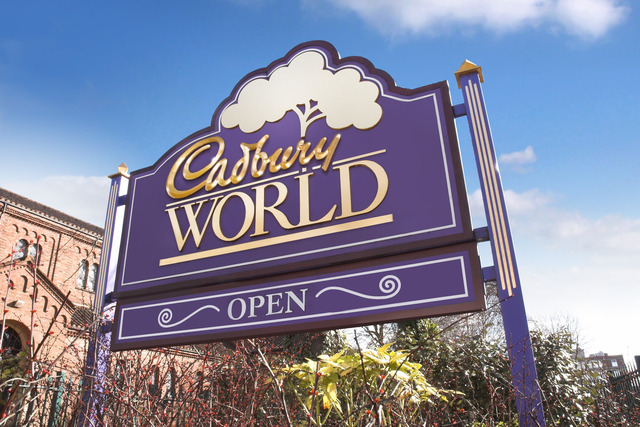 Both the young and young at heart will enjoy these sugary locations. Just don't forget to bring your toothbrush.

Hershey, Pennsylvania Known as "the sweetest place on earth," Hershey, Pennsylvania, actually smells of chocolate. Hershey is home to the world's largest chocolate factory (two million square feet of manufacturing space); boasts some Candyland-like streets, such as Cherry, Almond, and Cocoa; and is lit at night by Kiss-shaped lamps.

To start your indulgence, take a jaunt down Chocolate Avenue, where you'll find the Hershey Factory. While you cannot tour the factory, Hershey's Chocolate World, just a stone's throw away, will give you all the chocolate history and wonder you could want. On the Great American Chocolate Tour, visitors walk through the process of making chocolate--from the tropical rainforest where the cocoa beans grow to the transformation of beans to chocolate. At the end of this free tour, you'll get to enjoy a chocolate sample. Other attractions at Hershey's Chocolate World include a factory worker experience, create-your-own desserts, and a chocolate tasting adventure. And in time for this summer, get the chance to create your own candy bar on Hershey Chocolate World's newest attraction.

When you're ready for a little fresh air, hop aboard Hershey Trolley Works to see the sites. The History and Chocolate tour is the better of the two tours offered, although it is offered only between Labor Day and Memorial Day.

At the end of the day, take a rest from the festivities by stopping by Hotel Hershey for a decadent spa experience of chocolate-themed treatments. At the Chocolate Spa, regular spa treatments are available, but we recommend taking this one-of-a-kind opportunity and trying the Chocolate Bean Polish (exfoliation with cocoa bean husks and walnuts) or the Cocoa Facial Experience (with caramel, strawberry, rose, and mint aromas).

While you're there: Next door to Hershey's Chocolate World you'll find Hersheypark. This extensive amusement park (with water park) doesn't generally feature chocolate-themed rides, but it does have a Reese's Xtreme Cup Challenge with opposing peanut butter and chocolate teams. The park is closed January through March. Adjoining Hersheypark you'll find ZooAmerica North American Wildlife Park, which has over two hundred species from North America. Try visiting in late afternoon when the wolves are fed.

Only ten minutes from Hershey in Hummelstown, you'll find Indian Echo Caverns, a beautiful limestone cave that was used by the Susquehannock tribe until they disappeared in the 1670s. Regular tours explain the geology, biology, and history of the caves, and at the nearby Gem Mill Junction, visitors can prospect for amethyst, jasper, gold, and more. The cave is a consistent 52 degrees, so don't forget to bring a sweatshirt!

Follow your nose to the park, where you'll find glittering buildings of Cadbury purple. A path will lead you to the factory building to enter the main tour area.

Once you begin the self-guided tour, you will encounter fourteen interactive attractions (not to mention workers handing out free samples about every ten feet). These fourteen areas take you all the way from chocolate's beginnings in Aztec society to virtual demonstrations where you can chase creme eggs and see yourself made out of chocolate. One memorable area is Cadabra, which includes boarding your bean-mobile and riding through a chocolate wonderland, complete with dancing and lawn-mowing chocolate beans. At the end, you'll wind up in the factory store, where discounted and exclusive chocolate is available.

Now, you will likely be startled at the calories you've eaten in just over two hours' time. Look at it this way: you may have just eaten your weight in chocolate, but at least you'll be cured of the craving for weeks to come. Maybe.

Some things to consider before arriving: Look for discount coupons on admission. Some websites have 20-percent-off coupons for admittance, while others offer vouchers for free admittance. Reservations are recommended. And start your visit on a near-empty stomach--the heavenly smelling chocolate will initially have you in raptures, but even the most die-hard chocoholics will be tested for endurance as the day progresses.

While you're there: Take the Bournville Village Trail around beautiful Bournville--one of the "nicest places in Britain to live," according to the Joseph Rowntree Foundation. You'll pass some of the best spots the town has to offer, including Selly Manor and Minworth Greaves, two medieval homes refurbished to resemble the period in which they were built. Meandering through these rooms will bring you up close to heirlooms over four hundred years old, and out back you'll find an authentic Tudor garden.

Off Acacia Road and Maple Road in Bournville, you'll find Stocks Wood, a relic of the ancient Forest of Arden and one of England's bluebell woods. While you cannot walk around in the woods, the sight of blooming bluebells in spring is not to be missed. Take ten minutes to walk by the forest and look in from the street.

About fifteen minutes away, inside Birmingham, is the Thinktank--an interactive science museum perfect for following a visit to Cadbury World. Here kids can work with over two hundred hands-on exhibits, including exhibits on everyday life and the natural world (with a 10,000-year-old giant deer skeleton), eMo the emotional robot, and a 360-degree full-dome planetarium.

Finally, for a taste of something different, stop by the National Motorcycle Museum in Shropshire--the finest and largest motorbike collection in the world. Britain was once the top producer of motorcycles in the world, and this collection of shiny pieces pays homage to it. Careful: a visit may just strengthen Dad's resolve to get one of his own.

Jelly Belly Factory; Fairfield, California Jelly Bellies are the iconic American jelly bean. Manufactured by the company that first produced gummi bears for the U.S. market, this gourmet jelly bean was so loved by Ronald Reagan that he served them at his inauguration, kept a jar on his desk, and made them the first jelly beans in space. Jelly Belly's Fairfield, California, manufacturing facility has won awards for being the best factory tour in the United States, and it's free.

Starting in the foyer, you'll be bombarded by jolly colors--the red and yellow of the brand, as well as the jelly bean artwork, which includes portraits of George Washington, Abraham Lincoln, and, of course, Ronald Reagan.

You'll proceed to the tour, where, unlike many of the other food factory tours, Jelly Belly has made provisions for visitors to see the process of making the product. On the tour you'll stroll along suspended walkways built above the bustling, multi-colored manufacturing floor. With the help of video segments, you'll see how each bean experiences steam treatments, sugar showers, multiple sugar coats, polishing, and stamping--an intricate process for producing fairly innocuous beans. The tour ends in a store where you can buy regular beans and "Belly Flops," two or more jelly beans that got fused during manufacturing and are sold at discount.

Before getting there, make sure to check that the factory will be running. Scheduled closures include weekends and the end of June, when the factory rests. Finally, Jelly Belly also has a distribution facility in Pleasant Prairie, Wisconsin, which also offers public tours.

While you're there: Near Fairfield are other suburban cities like Vacaville, which has some amazing outlet stores, like Coach, Burberry, Columbia Sportswear, and J. Crew. But if you're willing to drive, Fairfield is positioned within an hour of San Francisco, where every corner is full of possibilities. The city has something for everyone: bustle at Fisherman's Wharf, shops and restaurants at Pier 39, history at Alcatraz and Coit Tower, wildlife at the San Francisco Zoo, beauty in the Japanese Tea Garden and along Lombard Street (the world's most crooked street), and simple fun on the cable cars.

A site that deserves special attention is the California Academy of Sciences. Located in the 1017-acre Golden Gate Park, the newly refurbished academy building includes a rainforest and "living roof," as well as the original natural history, botany, astronomy, and marine biology exhibits. In the aquatic area, kids will love Claude (a rare albino alligator), penguins, poison dart frogs, and deep-sea fish that glow in the dark. The entire experience is amazing--but be prepared to pay for it. Prices range between $24.95 for adults and $14.95 for children 7-11 (children 6 and under are free). Free admission is offered the third Wednesday of each month.

If the Jelly Belly Factory wasn't enough for you--and even if it was--make sure to visit San Francisco's own sweet spot, Ghirardelli Square. At the chocolate company's flagship store on Larkin, order some great ice cream sundaes and watch the chocolate-making machinery while you wait. Don't be tempted to order something fancy--the classic World Famous Sundae is the best. After you get your fill of delicious sweets, poke around the whole of the square; you'll find some one-of-a-kind shops that are entertaining to look through.

Your tour of this ice cream mecca will be brief (about thirty minutes), so it's good to have other things planned for the day. Starting with an intriguing video outlining how ice cream is made, you'll get to walk through and see the inner workings of the plant. Take a good look and see if you can recognize the flavors being made. If you see a favorite, you're in luck--you'll get to taste test those flavors at the end of the tour. You'll also get a chance to purchase rare flavors, like Mountain Blueberry.

Don't think you're finished, though. One of the best parts of the tour is the darkly humorous Flavor Graveyard, located on a peaceful knoll behind the plant. Eight to twelve flavors join these ill-fated ranks every year as underperformers get the axe. See if you can find one of your favorites. Still pining over the loss of Peanut Butter & Jelly (1998-99)? Now you can pay your respects.

While you're there: With rolling hills and a sparse population, the best outings in a Vermont vacation will be understated. One such visit is Mount Mansfield, said to have the profile of a person (from east to west). Drive your car up the toll road to the "nose" and hike up to the "chin." Be prepared: the toll road is steep, has hairpin turns, and is mostly unpaved.

After working up your appetite, stop by Cold Hollow Cider Mill, where you can watch workers make fresh cider from Vermont apples, sample free cider popsicles and specialty Vermont mustards and jams, watch bees making honeycombs in summertime, and try the legendary cider donut. Drive fifty minutes from here and you can visit the Joseph Smith Birthplace Memorial in Sharon, Vermont.Nauvoo Hotels

For those who like to look in unique shops, stop by Church Street Marketplace. This brick-building street has a quaint feel, much like traditional "main streets" in America. Stop by Lake Champlain Chocolates for some delectable, fresh chocolate. (If you haven't had your "watch them make it" fill, you can visit Lake Champlain Chocolates' factory store a few blocks away, on 750 Pine Street.) You can also find the entrance to the underground Burlington Town Center Mall on Church Street.

Gilroy Gardens Had enough sweets? Try visiting the vegetable- and plant-themed Gilroy Gardens, located in Gilroy, California--known also as the "salad bowl." This garden, which features nineteen rides situated among beautiful gardens, will be celebrating its tenth season in 2010.

With a purpose to educate and foster a greater appreciation of horticulture, the park focuses mainly on agronomy. It even has a special "produce section," with rides like Artichoke Dip (ride in a giant artichoke and avoid the mayo!), Apple & Worm (ride through an apple), and Garlic Twirl, a ride that pays homage to Gilroy's most important crop. The park also has traditional theme park rides.

Aside from roller coasters and fruit and vegetable rides, you'll find world-famous circus trees--painstakingly grafted trees that form unique shapes--and majestic gardens, including one where you can drive through a back-roads garden inside your very own antique car.