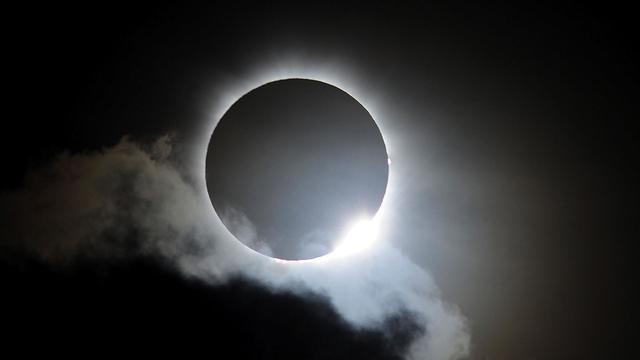 Did a Solar Eclipse Darken the Skies During Jesus’s Crucifixion?

Recently, Religion News Service asked religious experts, including the director of the Vatican Observatory, about the long-debated theory that the darkness that descended over Jerusalem during the crucifixion of our Savior Jesus Christ was caused by a solar eclipse. It's a concept even Sir Isaac Newton entertained and pursued.

What is interesting about this debate is that these religious experts came to the same conclusion Elder James E. Talmage did when he wrote Jesus the Christ in 1915. As Elder Talmage wrote:

Jesus was nailed to the cross during the forenoon of that fateful Friday, probably between nine and ten o’clock. At noontide the light of the sun was obscured, and black darkness spread over the whole land. The terrifying gloom continued for a period of three hours. This remarkable phenomenon has received no satisfactory explanation from science. It could not have been due to a solar eclipse, as has been suggested in ignorance, for the time was that of full moon; indeed the Passover season was determined by the first occurrence of full moon after the spring equinox. The darkness was brought about by miraculous operation of natural laws directed by divine power. It was a fitting sign of the earth’s deep mourning over the impending death of her Creator. Of the mortal agony through which the Lord passed while upon the cross the Gospel-scribes are reverently reticent.

Jesus Christ's death occurred during the Passover, a religious holiday that coincides with the full moon, making a solar eclipse impossible since they occur during new moons. While others have hypothesized the darkening of the sun could have been caused by a lunar eclipse instead of a solar eclipse, John Dvorak, author of Mask of the Sun: The Science, History and Forgotten Lore of Eclipses, insists that the lunar eclipse that best coincides with the possible date of Jesus's death could not have been seen in Jerusalem.

As the Rev. James Kurzynski told Religion News Service, this desire to explain away heavenly events is “a byproduct of living in a modernist culture that tries to explain everything with science.”

“We begin to fall into the mindset that there must be a natural explanation for everything in the Bible,” Kurzynski said.

This verifies what prophets and apostles have taught all along, that scientific explanations for scriptural events do not prove the divinity of such events. Instead of focusing on these tangential curiosities, we should instead remember the power of the truths Elder Talmage wrote:

At the ninth hour, or about three in the afternoon, a loud voice, surpassing the most anguished cry of physical suffering issued from the central cross, rending the dreadful darkness. It was the voice of the Christ: “Eloi, Eloi, lama sabachthani? which is, being interpreted, My God, my God, why hast thou forsaken me?” What mind of man can fathom the significance of that awful cry? It seems, that in addition to the fearful suffering incident to crucifixion, the agony of Gethsemane had recurred, intensified beyond human power to endure. In that bitterest hour the dying Christ was alone, alone in most terrible reality. That the supreme sacrifice of the Son might be consummated in all its fulness, the Father seems to have withdrawn the support of His immediate Presence, leaving to the Savior of men the glory of complete victory over the forces of sin and death. The cry from the cross, though heard by all who were near, was understood by few. . . .

Fully realizing that He was no longer forsaken, but that His atoning sacrifice had been accepted by the Father, and that His mission in the flesh had been carried to glorious consummation, He exclaimed in a loud voice of holy triumph: “It is finished.” In reverence, resignation, and relief, He addressed the Father saying: “Father, into thy hands I commend my spirit.” He bowed His head, and voluntarily gave up His life.

Jesus the Christ was dead. His life had not been taken from Him except as He had willed to permit. Sweet and welcome as would have been the relief of death in any of the earlier stages of His suffering from Gethsemane to the cross, He lived until all things were accomplished as had been appointed. In the latter days the voice of the Lord Jesus has been heard affirming the actuality of His suffering and death, and the eternal purpose thereby accomplished. Hear and heed His words: “For, behold, the Lord your Redeemer suffered death in the flesh; wherefore he suffered the pain of all men, that all men might repent and come unto him.”