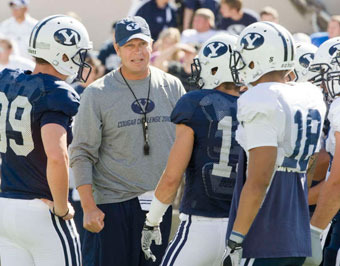 Do returned missionaries give BYU sports a competitive advantage?

Back in his heyday, then-Oklahoma coach Billy "The Kid" Tubbs once took aim at BYU's basketball program. In 1992, before his nationally ranked Sooners were to play in the prestigious Maui Invitational against BYU, Tubbs whined about Randy Reid being a 22-year-old freshman and the Cougars' unfair age advantage.

"I thought those were all supposed to be overseas," protested Tubbs, who is now the athletic director at Lamar. "He went to New Jersey."

Then-BYU coach Roger Reid responded by saying that one of his missionaries was 7-foot-6 Shawn Bradley, a future NBA first-round pick. Would Billy prefer playing against Bradley or a team without Bradley? Certainly, the latter.