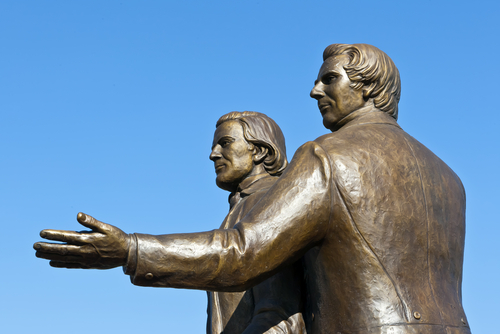 Doctrine and Covenants and Church History Lesson 32: "To Seal the Testimony"

Consider the following names: John the Baptist; 1000+ Anti-Nephi-Lehies; Abinadi; Joseph Smith. What do these have in common? They were martyred because of their commitment to the truth. Can you identify other martyrs from scriptural and church history? (Answers might include Abel (Moses 5:32), Zacharias (the father of John the Baptist—Matthew 23:35), Stephen (Acts 7:56-60), James (the brother of John—Acts 12:2)), Hyrum Smith (D&C 135:1, etc) According to D&C 135:3, why do so many of “the Lord’s anointed” die at the hands of their enemies? (See also D&C 136:5, 6)

Turn to D&C 135. What are the reasons given there for the martyrdom?

- To seal the testimony of the Doctrine and Covenants and the Book of Mormon (v.1).

- “Their innocent blood on the floor of Carthage jail is a broad seal affixed to ‘Mormonism’ that cannot be rejected by any court on earth” (v.7)

- “Their innocent blood . . . is an ambassador for the religion of Jesus Christ, that will touch the hearts of honest men among all nations” (v. 7).

- “It was needful that he should seal his testimony with his blood, that. . . the wicked might be condemned.” (v. 39)

Traitors and wicked men caused Joseph and Hyrum to be confined in the jail at Carthage. These men included anti-Mormons and apostate Mormons, including some who at one time had leadership positions in the Church. During 1843 and the first part of 1844, animosity against the members of the Church in Illinois and against their prophet-leader increased. President John Taylor wrote of the enemies of the Church:

This conglomeration of apostate “Mormons,” religious bigots, political fanatics and blacklegs [a gambler who cheats, or a crook], all united their forces against the “Mormons,” and organized themselves into a party denominated “anti-Mormons.” . . . The anti-Mormons had public meetings which were very numerously attended, where they passed resolutions of the most violent and inflammatory kind, threatening to drive, expel and exterminate the “Mormons” from the State, at the same time accusing them of every evil in the vocabulary of crime. (From John Taylor’s account of the Martyrdom, published in the introduction to Sgt. Daniel Tyler, A Concise History of the Mormon Battalion, [Chicago: Rio Grande Press, 1964], pp. 14)

As the hostility in and around Nauvoo increased, Joseph’s enemies made the decision to publish an anti-Mormon newspaper. As a result of the publication of the Nauvoo Expositor, and the abatement of that paper by city authorities, Joseph and Hyrum Smith and members of the City Council of Nauvoo were arrested and required to go to Carthage, Illinois, the county seat, to answer charges. While they were there, the charges against them were changed and they were forced into jail in that community. While they were in the jail, the martyrdom occurred. What evidence is there that Joseph knew that his martyrdom would occur at Carthage? (see 135:4)

Very early in the restoration, Joseph had received warnings from the Lord about what the future might hold. In March of 1829 the Lord had counseled Joseph to be

“firm in keeping the commandments wherewith I have commanded you; and if you do this, behold I grant unto you eternal life, even if you should be slain.” (D&C 5:22)

The next month the Lord told his Prophet,

“And even if they do unto you even as they have done unto me, blessed are ye, for you shall dwell with me in glory.” (D&C 6:30)

But even facing the prospect of violent death, Joseph had a promise to cling to:

“Therefore, hold on thy way, and the priesthood shall remain with thee; for their bounds are set, they cannot pass. Thy days are known, and thy years shall not be numbered less; therefore, fear not what man can do, for God shall be with you forever and ever.” (D&C 122:9)

The following account was written by Willard Richards. It is entitled “Two Minutes in Jail.” This account begins as the mob arrives at the jail just after 5:00 p.m. on the afternoon of June 27, 1844.

“A shower of musket balls were thrown up the stairway against the door of the prison in the second story . . . . as soon as we heard the feet at the stairs head, a ball was sent through the door, which passed between us . . . .

“General Joseph Smith, Mr. Taylor and myself sprang back to the front part of the room, and General Hyrum Smith retreated two-thirds across the chamber directly in front of and facing the door.

“A ball was sent through the door which hit Hyrum on the side of his nose, when he fell backwards . . . .

“. . . . it appears evident that a ball must [also] have been thrown from without, through the window, which entered his back on the right side, and passing through, lodged against his watch . . .

“As he struck the floor he exclaimed emphatically, ‘I am a dead man.’ Joseph looked toward him and responded, ‘Oh, dear brother Hyrum!’ and opening the door two or three inches with his left hand, discharged one barrel of a sixshooter (pistol) [given to him by Cyrus Wheelock] at random in the entry . . .

“Joseph continued snapping his revolver . . . while Mr. Taylor with a walking stick stood by his side and knocked down the bayonets and muskets which were constantly discharging through the doorway . . . .

“Mr. Taylor rushed into the window . . . a ball from the door within entered his leg, and a ball from without struck his watch . . . in his vest pocket near the left breast, and smashed it into ‘pie,’ leaving the hands standing at 5 o’clock, 16 minutes, and 26 seconds, the force of which ball threw him back on the floor . . . .

“Joseph attempted, as the last resort, to leap the same window . . . when two balls pierced him from the door, and one entered his right breast from without, and he fell outward exclaiming, ‘Oh Lord, my God!’ . . . He fell on his left side a dead man.

“At this instant the cry was raised, ‘He’s leaping the window!’ and the mob on the stairs and in the entry way ran out.

“I . . . caught Mr. Taylor under my arm and rushed by the stairs into the dungeon, or inner prison, stretched him on the floor and covered him with a bed in such a manner as not likely to perceived, expecting an immediate return of the mob.

“I said to Mr. Taylor, ‘This is a hard case to lay you on the floor, but if your wounds are not fatal, I want you to live to tell the story.’ I expected to be shot the next moment, and stood before the door awaiting the onset” (Joseph Smith, History of the Church, Vol. VI, pp. 619-621).

Willard Richards’ life was spared in fulfillment of a prophecy given by Joseph Smith more that in year before in which Joseph told him that “the time would come that the balls would fly around him like hail, and he should see his friends fall on the right and on the left, but that there should not be a hole in his garment” (History of the Church, VI, p 619).

2. Joseph Smith did more for the salvation of men in this world than anyone except Jesus

Look at D&C 135:3. What kind of contribution did Joseph Smith make to the welfare of the world and the children of God?

Joseph Smith, the Prophet and Seer of the Lord, has done more, save Jesus only, for the salvation of men in this world, than any other man that ever lived in it. In the short space of twenty years, he has brought forth the Book of Mormon, which he translated by the gift and power of God, and has been the means of publishing it on two continents; has sent the fulness of the everlasting gospel, which it contained, to the four quarters of the earth; has brought forth the revelations and commandments which compose this book of Doctrine and Covenants, and many other wise documents and instructions for the benefit of the children of men; gathered many thousands of the Latter day Saints, founded a great city, and left a fame and name that cannot be slain. He lived great, and he died great in the eyes of God and his people; and like most of the Lord's anointed in ancient time, has sealed his mission and his works with his own blood; and so has his brother Hyrum. In life they were not divided, and in death they were not separated!

According to this verse, what were some of the major achievements of the Prophet during his lifetime? Can you think of other accomplishments of the Prophet during the twenty-four years of his ministry? For example, the Book of Mormon, the true nature of God, the nature of the Godhead, priesthood authority, the Plan of Salvation, and temple ordinances.

D&C 135:3 tells us that “Joseph Smith, the Prophet and Seer of the Lord, has done more, save Jesus only, for the salvation of men in this world, than any other man that ever lived in it.” Why would the scriptures make such a claim? What did Joseph do for all those who live in mortality? He was the instrument of the restoration, priesthood, ordinances, doctrines, scriptures, etc. In addition, consider what he did for the dead: the restoration of the sealing power, temples, and temple work, etc. Joseph Smith received and then conferred the keys necessary for the redemption of all mankind, living and dead.

Ponder the significance of the death of the Prophet Joseph and his brother Hyrum and the influence this event has had on you and on the Church since 1844.

Then read the following quote from President Stephen L. Richards:

“And then the cause that he established—could it have endured and prospered so well without the martyrdom? Of course, the answer to this must be conjectural, but it has seemed to me that the spirit of sacrifice, which is elemental in our religious philosophy, and fundamental in the success and triumph of the cause, would never have been so well established without this supreme sacrifice of the founder. . . . Strange that those men who took their lives could not have foreseen that this would be the case, and that there is no sealing of testimony so efficacious as that with blood, and that there is nothing more precious and inspirational to give to a cause than a life. They were blind indeed.” (“Joseph Smith, Prophet-Martyr,” Annual Joseph Smith Memorial Sermons, Dec. 7, 1952, LDS Institute of Religion, Logan, Utah, vol. 1, p. 103)

Was it necessary that they die to seal their testimonies? What does Hebrews 9:16, 17 teach us about this? (For a testimony to be in force beyond the life of the testator, the testator must go to his grave without altering that testimony) In some cases that death might come by natural means; or it might come by martyrdom as in the case of Joseph and Hyrum Smith and others. What does D&C 135:7 say about the significance of Joseph’s and Hyrum’s blood on the floor of Carthage Jail? What is that blood a witness to? (“the truth of the everlasting gospel, that all the world cannot impeach”) What impact should their martyrdom have among all nations? (D&C 135:7) What two reasons for the martyrdom does D&C 136:39 tell us about?

This might be an appropriate week to write your feelings about Joseph Smith and how he has influenced your life. Perhaps a family home evening could be devoted to a discussion of this man and his mission. Certainly your children should know how you feel about Joseph Smith and his work. I hope they have heard your testimony frequently.