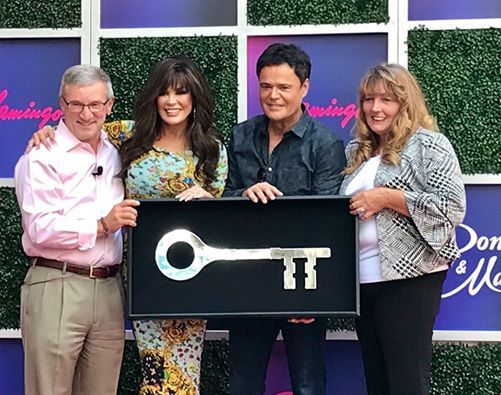 After 11 years and more than 1,600 performances at the Flamingo, Donny and Marie were honored by the city of Las Vegas with a key to the Strip and an upcoming star on the Walk of Stars.

On August 23, Donny and Marie received a key to the Las Vegas Strip, an honor shared by other celebrities and performers such as singer Britney Spears and Jeopardy! champion James Holzhauer.

"We’re so thankful for this city and all the love we’ve felt here through the years," Marie posted on Facebook about the event.

Only one key was provided for the duo, however, leading to a game of rock-paper-scissors to decide who would take the key. Though Donny won with a paper-over-rock move, Marie wasn't deterred. In their iconic sibling banter, Marie joked, "No, I beat you up!" according to closerweekly.com.

But all jokes aside, both were honored to receive the key, with Donny posting on Facebook, "We are grateful to the hundreds of people who have worked day-in and day-out to make this show a success for the last 11 years. And most of all, we appreciate our incredible fans. We couldn't have done this without you!"

But that's not all that's in store for the singing siblings. On August 16, Donny shared on Facebook that the brother-sister duo would receive their own star on the Las Vegas Walk of Stars on October 4.

"Las Vegas has become my home away from home, and the people I’ve met here are an extension of our family. I’m thrilled to celebrate alongside the city that means the world to me," he shared about the Walk of Stars announcement.

These honors follow Donny and Marie's announcement to end their 11-year Las Vegas show in November.