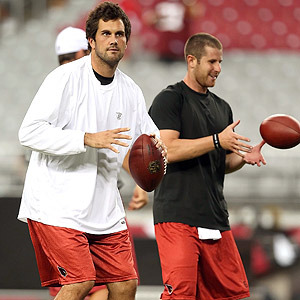 They don't know him. A woman called Sister Bee is working Tuesday afternoon in the Des Moines, Iowa-based office of the Latter-Day Saints Mission, and will confirm just one thing about Max Hall: No one on staff remembers him. It was years ago, and the faces are constantly changing. He knocked on doors, spread the word of Jesus in a crisp white dress shirt and tie, and had a few of those doors slammed on him. He was 19 years old and full of youthful ambition, boundless energy and love. Who would've guessed that this kid, so unsure of what lay ahead at the next door, would someday have 120,000 lungs screaming for him? Or that he'd leave so many people guessing?

Thing is, for the better part of six months, the entire locker room of the Arizona Cardinals didn't really know him, either. Undrafted rookie quarterbacks don't often get a chance to bare their souls, so here was the thumbnail sketch on Hall: He was Mormon. He had a wife and a baby and could be known, on occasion, to belt out a "yes sir" or a "yes ma'am." By all appearances, he was as wholesome as a box collection of Pat Boone CDs.

Then, on an October afternoon, with the season slipping away, Hall stepped into the huddle, 6-foot-1 (allegedly) and the antithesis of what the Cardinals' 2010 quarterback was supposed to be. Hall was the guy who got a $5,000 signing bonus -- $3,000 after taxes, his agent, Eric Metz, quickly says -- and was No. 4 on the depth chart last spring behind former Heisman Trophy winner and USC god Matt Leinart, veteran Derek Anderson and fifth-round draft pick John Skelton. Hall's future was so tenuous that he lived with his in-laws during spring workouts. All he wanted was a chance.