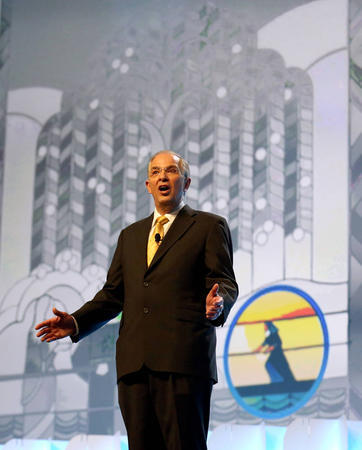 A year ago, Elder Neil L. Andersen of the Quorum of the Twelve Apostles issued a challenge to attendees of the 2014 RootsTech conference: “Prepare as many names for the temple as baptisms you perform in the temple.”

At the 2015 RootsTech Family Discovery Day on Saturday, Feb. 14, he noted that since last year’s convention tens of thousands had accepted the challenge and many had sent in stories about the blessings that had come into their lives. He then added a teaching element to the challenge, saying, “This year let’s add eight words to the temple challenge: ‘Prepare as many names for the temple as baptisms you perform in the temple, and help someone else to do the same.’"

Using the estimate of 100 billion people that have lived on the earth since its creation, Elder Andersen showed a video of what it might look like if these 100 billion people were organized as families in soccer fields. With 5,000 people per soccer field and 1,000 soccer fields per city, it would take 20,000 cities to hold 100 billion people. “These are our brothers and sisters: they are not just colors on a map,” he said. “We must come to know them, organize them and take their names to the temple.”