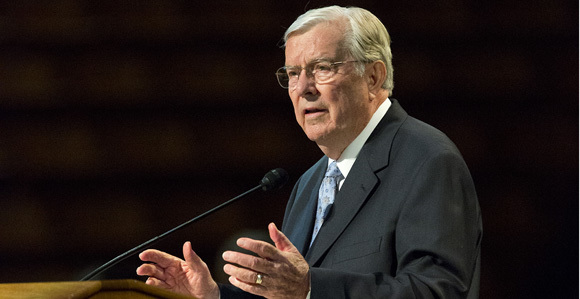 Pornography has become entirely normalized in our society.

“It is reported that 89 percent of teens and 95 percent of young adults regularly have either ‘encouraging’ or ‘accepting’ conversations with their peers about pornography use,” Elder Holland said in an address at the Utah Coalition Against Pornography conference. “That means that of those interviewed only 1 in 20 young adults and only 1 in 10 teens say they and their friends think viewing pornography is a bad thing.”

However, the Church and many of its members are working to reveal the dangers of pornography and to help those trapped in addiction overcome it. Recently, LDS senator Todd Weiler's passionate support of a resolution declaring pornography a public health crisis  made national headlines.

As a reaction to this strong stance, Penthouse attacked the LDS Church in one of their summer issues, something that demonstrates the Church's teachings are making a national impact.

Amidst all of this, Elder Russell M. Ballard recently wrote a post on Facebook that shows why we are all needed in the fight against pornography:

I want to talk to you about the need for you to join in the fight against pornography. It’s a terrible plague that is spreading across the world.

More than 180 years ago, the Lord revealed His law of health, including a warning about the use of tobacco. Millions of people listened to the Lord, but many more did not. No one knew at that time or even when I was your age the long-term effects of smoking. Today, after decades of scientific research, we now know smoking’s effect on lung cancer and other deadly diseases.

In similar ways the Lord in our day has warned us about the effects of pornography. Millions of people faithfully follow the Lord’s counsel, whereas countless others do not. We don’t have to wait, my dear friends, for 180 or even for 10 years to discover the devastating effects of pornography because current scientific research has revealed that pornography cripples young adults in several ways and poisons their chances of one day having a loving and lasting marriage relationship.

Initially, we must avoid pornography ourselves because it is deadly. It kills genuine, tender human relationships—destroying marriages and families. It destroys the spirit of the person who consumes it as surely as the most deadly poison kills the body and the mind.

My dear young brothers and sisters, do not be deceived. Do not think that once you go on your mission or once you get married you can stop this addictive behavior. If you are involved in it now, if you are entrapped in this practice, get spiritual help now. You can overcome pornography with the Savior’s assistance. Do not wait! I plead with you to leave it alone! There are many resources on LDS.org that will override the darkness of pornographic images.