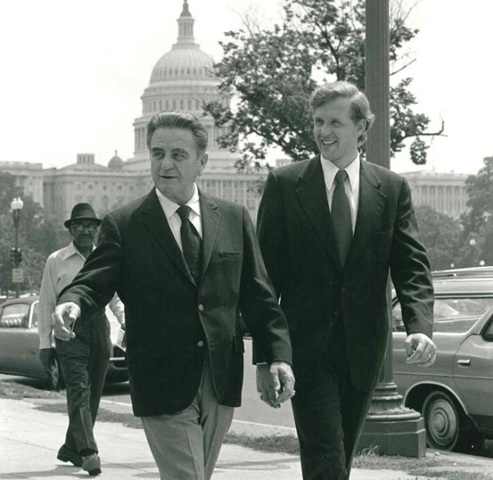 During his final year at law school at Duke University, David Todd Christofferson applied for a prestigious clerkship with Judge John J. Sirica. Despite there being over 200 other applicants, Sirica was impressed by the young Mormon family man, selecting him for the position.

Little did Christofferson know that his new position would plunge him into the depths of one of the biggest political scandals in American history as he listened to tapes from the Watergate scandal, answered questions from the media, and wrote up an opinion regarding the tapes.

About this experience, Elder Christofferson recently shared one important lesson he learned on Facebook:

► You'll also like: Mormons and the Watergate Scandal: 5 Fascinating Connections

Last Friday I had the chance to speak to young adults at the Orem Institute of Religion. I shared with them the unique experience I had to serve as the law clerk for the Honorable John J. Sirica. My term of service coincided with the Watergate trials and proceedings handled by Judge Sirica. This gave me a “ringside seat” to a unique epoch in U.S. history that enabled me to learn some crucial life lessons at the outset of my career.

Most of the Watergate defendants were basically decent people, good spouses and parents, competent professionals. What is it that caused or permitted them to go seriously offtrack? What protects you or me, in our lives, our marriages, our families, and our school and vocational endeavors, from tragically destructive errors or even criminal conduct?

The answer to these questions lies in the critical role of what we call conscience. A widely shared understanding of right and wrong underlies the moral framework and laws that govern conduct in society. For me, that is confirmed by statements in scripture. For example, in Moroni 7:15–16 it reads: “It is given unto you to judge, that ye may know good from evil; and the way to judge is as plain … as the daylight is from the dark night. For behold, the Spirit of Christ is given to every man, that he may know good from evil.”

Over the generations, religion has served to identify and deepen understanding of fundamental (I would say divinely ordained) moral laws. Of course, I am not saying that any particular religion or faith tradition should have a right to dictate the morals of society, but the religious voice is critical. No society has succeeded in maintaining moral life without it. For just societies to endure, religious voices must be heard.

May your voice in support of eternal truths and moral principles be heard. May your own conscience grow increasingly firm and refined. And may there never be a Watergate in your personal history.