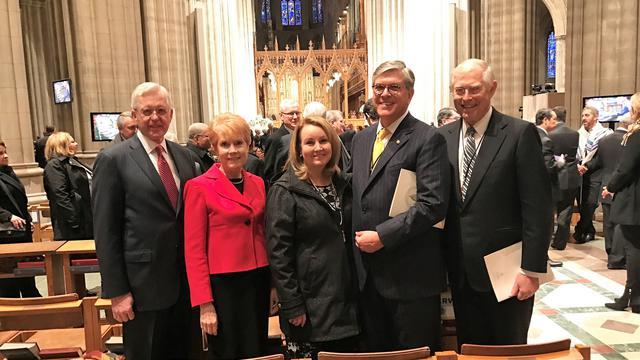 At the National Prayer Service offered Saturday morning at the Washington National Cathedral, 25 faith leaders offered prayers for the country and its new leader.

Among them was Elder D. Todd Christofferson. “There was a wide variety of faiths represented, and it was an honor for us to be included," Elder Christofferson told Mormon Newsroom. "I felt the Church was recognized and honored and that the prayers for the nation were heartfelt—that our leaders would be wise and Spirit-guided. It was a wonderful unity of spirit, unity in behalf of our leadership and for the good of the country."

Elder Christofferson offered a prayer that might have sounded unusual to Latter-day Saints, as it was "a prayer adapted from an Episcopal text read at George Washington’s inaugural service," the Washington Post noted.

"O, Lord, our Heavenly Father, whose glory is in all the world," Elder Christofferson prayed, according to the Deseret News. "We commend this nation to thy merciful care, that, being guarded by thy Providence, we may dwell secure in thy peace.

"Grant to Donald John Trump, president of the United States, and to all in authority, thy grace and favor. Give them wisdom and strength to know and to do thy will. Endue them with thy heavenly gifts. Fill them with the love of truth and righteousness, and make them ever mindful of their calling to serve this people in thy fear; through Jesus Christ, our Lord, who lives and reigns with thee and the Holy Spirit, one God, world without end."