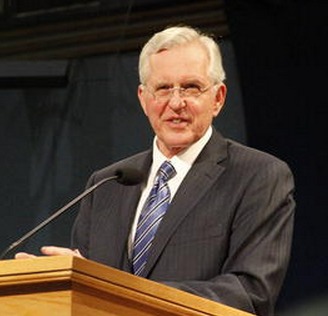 Elder Christofferson Teaches Worth of Soul at Devotional

To God, mortal men and women have infinite value, Elder D. Todd Christofferson of the Quorum of the Twelve Apostles declared June 24 to elders and sisters at a devotional emanating from the Provo Missionary Training Center and carried internationally to other missionary training centers.

In addition to young and senior missionaries, the devotional was attended by 129 mission presidents and their wives gathered at the center for four days of intensive training and spiritual edification prior to their departure for their individual fields of labor.

Referring to Genesis 1:27, which states God created man in His own image, Elder Christofferson observed that the statement is sometimes used as evidence of the corporeal nature of God.