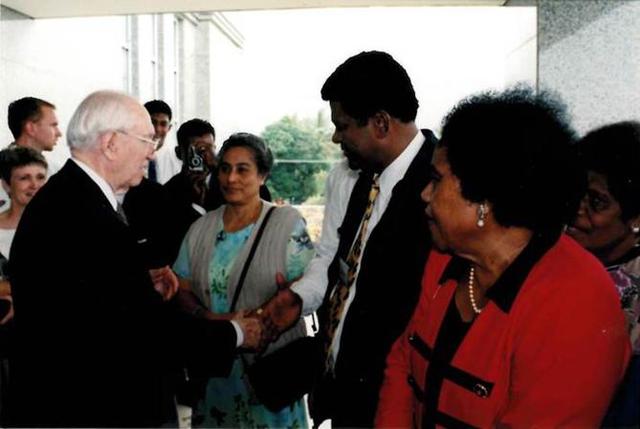 Days after armed rebels took a group of government leaders hostage in Fiji in May 2000, Elder Quentin L. Cook traveled to the Pacific island nation and met with military leaders to talk about the upcoming dedication of the Church’s Suva Fiji Temple and the political unrest in Fiji that might prevent it.

Visiting Fiji again Feb. 19-21 for the public rededication of the temple and a youth cultural celebration, Elder Cook recalled the private events leading up to the temple’s original dedication almost 16 years ago. . . .

In 2000, Elder Cook — now of the Quorum of the Twelve Apostles — was serving as president of the Church’s Pacific Islands Area and was one of very few people on a flight from Auckland, New Zealand, into Fiji. At the airport he was greeted by hundreds of people trying to flee the country.

Lead image from Deseret News. On the day he dedicated the Suva Fiji Temple, on June 18, 2000, President Gordon B. Hinckley shakes hands with members outside the temple's doors. Because martial law was declared after armed rebels took over a government building, only a limited number of Latter-day Saints were able to attend the dedication. (Photo courtesy of the Office of the President, IRI)