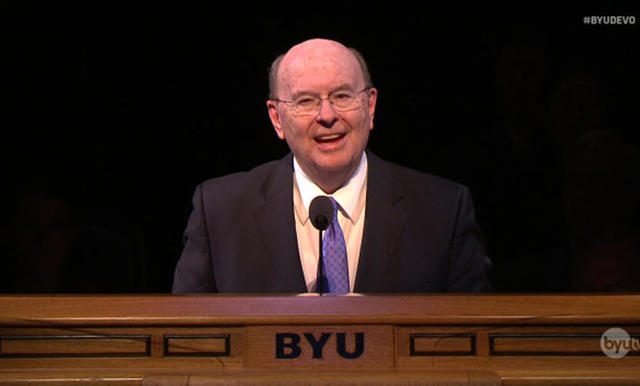 As part of a recent devotional at BYU, Elder Quentin L. Cook discussed two topics that have garnered a lot of attention throughout the countries in recent years. In his devotional, Elder Cook addressed the potential misery that can come from these topics and some of the sensitivities that surround them.

BYU senior Alysha Carroll is happily engaged, but she faced a sobering realization Tuesday: She wouldn't have a fiancé if his family had stuck to the U.S. norm for family size.

That thought had never crossed her mind before Elder Quentin L. Cook of the LDS Church's Quorum of the Twelve Apostles conducted an interactive exercise with thousands of students during a BYU devotional in the Marriott Center on Tuesday.

Carroll and her fiancé watched the devotional on a live feed in the Varsity Theater at the Wilkinson Student Center to avoid the rain, but he stood with others when Elder Cook asked students born third or later in their families to do so.

The exercise was part of Elder Cook's bold message on the consequences of alcohol culture and abortion. He said the world inverts values to make good look miserable and evil seem sweet.