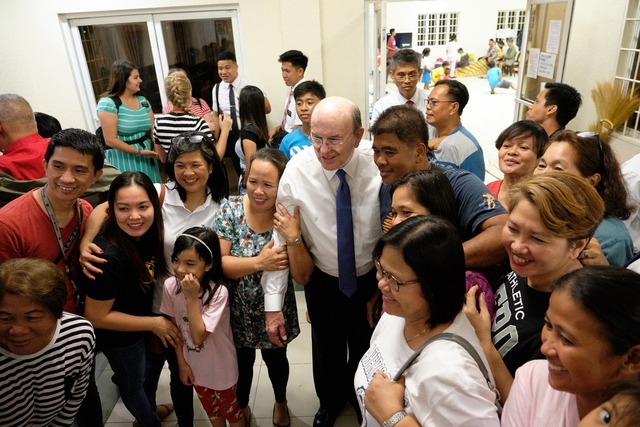 Some of those seeking refuge from the effects of the Taal Volcano received an unexpected surprise when Elder Quentin L. Cook of the Quorum of the Twelve Apostles dropped by on Wednesday.

Elder Cook met with those seeking shelter from the effects of the Taal Volcano at the Batangas Philippines Stake Center of The Church of Jesus Christ of Latter-day Saints, according to Church Newsroom.

“I honestly can’t remember a time when I’ve seen people who were quite as resilient and quite as smiling even with severe devastation,” Elder Cook said in a video. “They seem to watch out for each other and seem to have their spiritual sense that things are going to be alright.”

The volcano erupted for the first time in 43 years on January 12. The Church is sheltering nearly 500 people in five meetinghouses who are unable to return to their homes due to the possibility of the volcano erupting again.

► You may also like: Elder Cook Meets with President of Philippines Following Volcanic Eruption

Despite not knowing when they will be able to return to their homes, the Filipinos are keeping their spirits up.

“Filipinos always smile even though we feel a lot of trials” one of the evacuees said in the video. “We believe that we can recover in this situation.”

“If anything, I’m leaving feeling uplifted myself,” Elder Cook said.

READ THE REST OF THE STORY AT CHURCH NEWSROOM