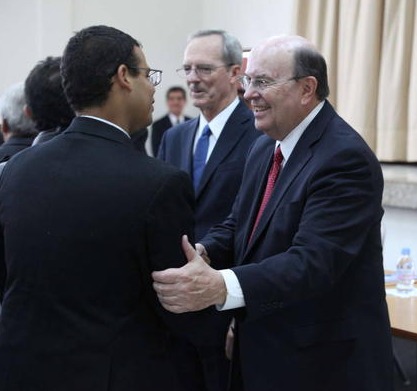 Elder Cook and Elder Callister visited Venezuela, located on the northern coast of South America, on Aug. 16-18. During an adult devotional to a large congregation that was broadcast throughout the country, Elder Cook left an apostolic blessing on the people and country that face many challenges. He also bore witness of the Savior and the Atonement.

"I know that there's been hardship in their lives that are beyond what most of the Saints across the world face," he said in a discussion with the Church News. "And I felt inspired to talk to them about how the Savior's Atonement overcomes not only sin and death, not only allows us to have exaltation and salvation, but that it does cover all of the heartache, all of the heartbreak, all of the evils, all of the seeming unfairness of life."

The church has a strong and growing membership in Venezuela. The first branch of the church was organized in the country in 1966 and the Venezuela Mission was created in July 1971. Today the country has some 150,000 members, four missions and a temple, dedicated in 2000 by President Gordon B. Hinckley.