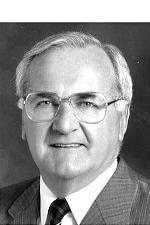 Elder Hans B. Ringger of the First Quorum of the Seventy dies at age 84

Elder Hans Benjamin Ringger, emeritus member of the First Quorum of the Seventy, died at his home in Basel, Switzerland, on Oct. 18, 2010. He was 84.

Described by President Thomas S. Monson in his biography To the Rescue as "one of the great moving forces in the expansion of the work in Europe," Elder Ringger was known for his service in the Church — especially in the European/Mediterranean area.

"During Elder Monson's visits to Europe, he was often accompanied by whoever was serving as mission president of the North German Mission. Elder Hans B. Ringger, a stake president in Switzerland who eventually became a General Authority, accompanied him on many of his visits. Elder Ringger's unique background, devotion to the Lord, Swiss citizenship and multilingual capabilities made him invaluable in working with the Saints in the Eastern bloc countries. Brother Ringger praised the many experiences he had during those years working at Elder Monson's side, saying that 'his great spirit and love for the people' was a significant boost to the Saints" (Heidi S. Swinton, To the Rescue, The Biography of Thomas S. Monson, pg. 296).