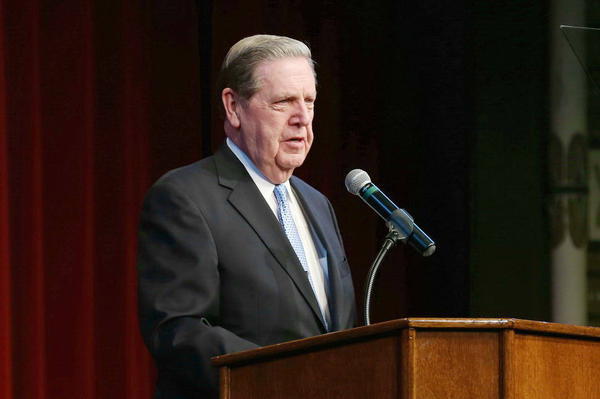 Elder Holland: 3 Christian Values that Are at Risk in the 21st Century

Elder Holland was the featured speaker at the 10th anniversary celebration of the university’s Fish Interfaith Center, addressing the topic “Faith, Family and Religious Freedom.” He delivered an address 10 years ago when the interfaith center was launched.

“Whatever our religious affiliation, we all share concerns about the spread of pornography and poverty, abuse and abortion, illicit sexual transgression (both heterosexual and homosexual), violence, crudity, cruelty and temptation,” Elder Holland said.

“Indeed, the longer I live the more convinced I am that as Christians we play into the devil’s hand to let lesser differences obscure chances for greater unity, to let animosity canker our inherent brotherhood and sisterhood, to let sectarian tradition destroy our collective desire to go about ‘doing good’ ” (Acts 10:38).

He added, “In that spirit I wish tonight to touch on three commonly held values — beliefs, if you will — that are at risk as we progress into the 21st century.” Identifying them as faith, family and religious freedom, he said they are not necessarily new issues but they are under fire in new ways.