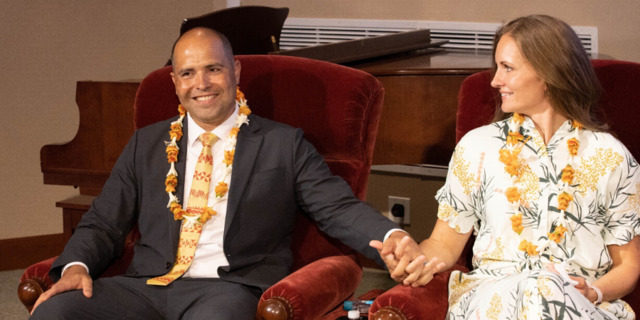 The Board of Trustees of Brigham Young University–Hawaii has appointed John “Keoni” Kauwe the university’s 11th president. Kauwe and his wife, Monica, will succeed John S. Tanner and his wife, Susan, who have served since 2015.

The announcement was made Tuesday, May 12, 2020, by Elder Jeffrey R. Holland of the Quorum of the Twelve Apostles during the weekly BYU–Hawaii devotional. The address was broadcast from the Church Office Building auditorium on Temple Square in Salt Lake City.

“We are grateful for [President Tanner’s] industry, his loyalty, his religious faith and his academic vision,” Elder Holland said. “We will miss both John and Susan very much. At some point we all will gather to sing ‘Aloha Oe’ to them.”

Dr. Kauwe is the dean of graduate studies at Brigham Young University (BYU) in Provo, Utah. He is an internationally recognized researcher who specializes in Alzheimer’s disease genetics. He has deep roots in Hawaii; spent several years of his childhood on the islands of Kaua’i, O’ahu, and Moloka’i; and graduated from Moloka’i High School. In recent years, the Kauwes has returned to Hawaii to visit relatives in the summer.

President Kauwe said the invitation to serve at BYU–Hawaii came from President Russell M. Nelson, President Dallin H. Oaks and President Henry B. Eyring — members of the First Presidency who also serve as officers of the BYU–Hawaii Board of Trustees.

“President Nelson made it clear that this position was for both of us,” said President Kauwe, who has been married to Monica for 17 years. “He instructed us that our success is to be measured by ‘faith, virtue, knowledge, temperance, patience, brotherly kindness, godliness, charity, humility, diligence’ (D&C 4:6).”

BYU–Hawaii is the Church’s preeminent international center of learning in the Pacific region. Its small campus is a laboratory of intercultural leadership development where a diverse population of 3,200 students representing over 70 countries lives, studies and works together.

President Kauwe said he is committed to building on the institution’s diverse strengths to continue a legacy of learning.

“This university is and will continue to be a place where people from across the world gather to be one in Christ and educate and uplift each other,” he said. “Diversity of culture, experience and thought is one of our greatest strengths. So too is our striving for unity as children of God bathed in the light of the restored gospel. Diversity and unity work together here at BYU–Hawaii in remarkable ways. I am deeply committed to building on past efforts to prepare our students with knowledge and testimony sufficient to make them ‘men and women whose influence will be felt for good towards the establishment of peace internationally.’”

Monica spoke of the enduring value of her educational endeavors and of her hopes for this new opportunity to serve.

“Every aspect of my secular and spiritual education has brought me joy,” said Sister Kauwe, who earned a degree in chemistry and worked in the pharmaceutical industry before becoming a full-time mother of five. “I want each of you to know how excited I am to be part of that same joyful experience for you at BYU–Hawaii. I will do everything I can to be a meaningful part of the effort to support our students.”

Outgoing President Tanner said it is a blessing to have his 40-year career as an educator conclude at BYU–Hawaii. 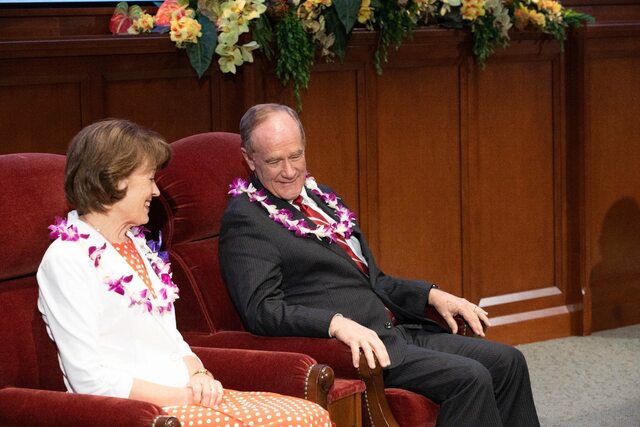 “As I come to the end of my journey in the academy, I confess that I disembark with the heart of a teacher and a preacher,” he said. “I feel more alive and more able to give my gifts in the classroom, at the pulpit and on the page than in producing budgets, agendas, policies and memos. I suppose that this is why I write essays and give so many talks. I hope to find a way to leave some of these with you as a record of our journey together and perhaps a comfort and inspiration as you continue the voyage.”

Sister Tanner said one of her greatest joys in university life has been to witness the growth of students who then “return to nations, islands and states everywhere to build families, communities and the kingdom of God. I am so thankful for this privilege. … We are sad to be leaving you but feel comfort in the knowledge that we will meet again, and that we will be forever bonded.”

President Kauwe will assume his role on July 1. An inauguration will be planned at a future date.

Dr. Kauwe joined the biology department in the College of Life Sciences at Brigham Young University in 2009 and later served as chair of the biology department. He was appointed as the dean of graduate studies in 2019. Dr. Kauwe received a doctorate in evolution, ecology and population biology in 2007 from Washington University in St. Louis. He then completed a postdoctoral fellowship in Alzheimer’s disease genetics at the Washington University School of Medicine. He received a bachelor’s degree in molecular biology and a master’s degree in population genetics from BYU. He has made important contributions toward discovering more than a dozen new genetic risk factors for Alzheimer’s disease.

Dr. Kauwe served a mission for The Church of Jesus Christ of Latter-day Saints in the Japan Fukuoka Mission from 1999 to 2001.

In 2003, Dr. Kauwe married Monica Mortenson of Provo. They are the parents of five children, who range in age from 2 to 13, and currently reside in Orem, Utah.

Dr. Kauwe’s fourth great-grandfather, Kaleohano, was one of the first converts to The Church of Jesus Christ of Latter-day Saints in Hawaii. He was taught by Elder George Q. Cannon in 1851.

In his off time, President Kauwe enjoys playing with his children and fishing. Monica’s hobbies include baking and hiking.