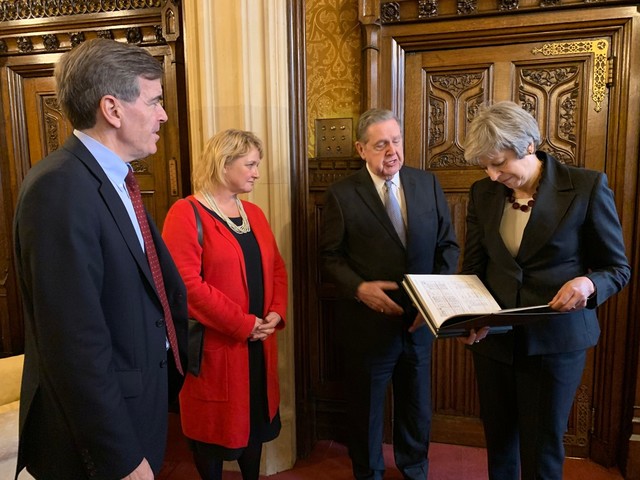 British Prime Minister Theresa May was hip-deep in controversy during what is a dramatic moment in Great Britain's history when she paused Wednesday to receive Elder Jeffrey R. Holland of the Quorum of the Twelve Apostles of The Church of Jesus Christ of Latter-day Saints.

May confronted fiery tirades from members of Parliament during the noon hour as part of her weekly prime minister's questions session. Elder Holland watched from the Members' Gallery, sitting on a green-upholstered wooden bench in the historic chambers of the House of Commons.

After a lunch with a dozen members of Parliament, he then spent 15 minutes with May, presenting her with bound copies of her family history in her office before she flew to Brussels for additional critical negotiations about Brexit, her nation's planned exit from the European Union.

"I said, 'Given the kind of day that you had and the week that you are having, this is meant to be a kind of a respite,'" Elder Holland said after meeting May. "And she said, 'This is a true interlude. This is a happy moment.' She smiled about that. I think it was nice for her to have somebody who was not shouting in her face or shaking a fist over some element of Brexit."