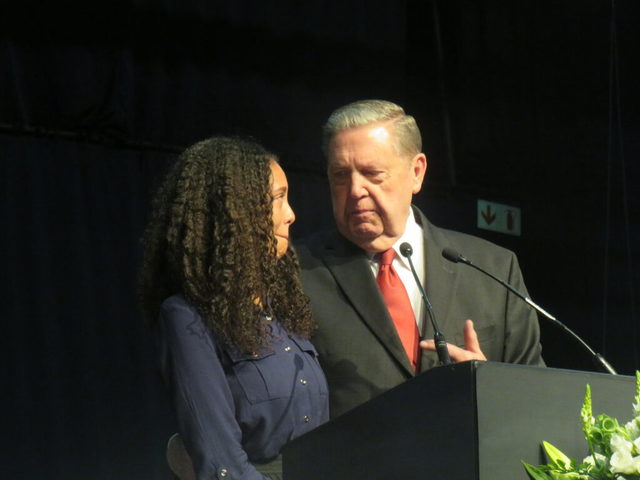 Elder Jeffrey R. Holland of the Quorum of the Twelve Apostles just returned from visiting the region of Southeast Africa from November 9–16 where he addressed possibly the "largest gathering of Saints ever in South Africa," according to Robert C. Gay of the Presidency of the Seventy.

In the Gallagher Convention Center 16 miles north of Johannesburg, South Africa, Elder Holland was greeted by more than 7,500 people, which was 2,000 more than was expected for his address on Sunday, November 10.

While in the area Elder Holland and his wife, Patricia, also joined by Elder Gay and his wife, Lynette, and Presiding Bishop Gérald Caussé and his wife, Valerie, also made stops in Kenya, Zimbabwe, Botswana, and the Democratic Republic of the Congo. The group participated in conferences, missionary meetings, and devotionals.

It's an exciting time for members of the Church in Southeast Africa and one of exceptional membership growth. A few weeks ago the Church announced that eight new missions that will be opening around the globe, four of which will be located in that same region where Elder Holland visited. The four missions include the Cameroon Yaoundé Mission, Ethiopia Addis Ababa Mission, Tanzania Dar es Salaam Mission, and Mozambique Beira Mission, which will be the second in Mozambique with the previous three being the countries' first missions.

Click here to learn more about the week-long visit and ministry of Elder Holland and other Church leaders in Africa.

Mormon Life ApostlesApostles,Mormon Life
Comments and feedback can be sent to feedback@ldsliving.com