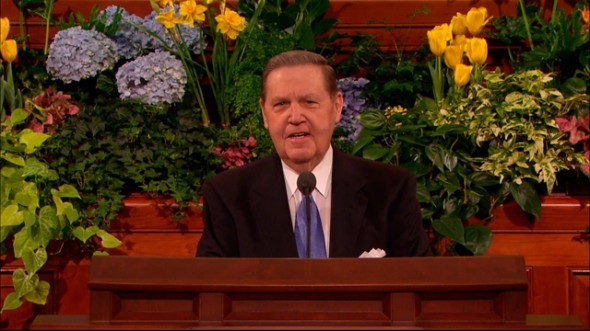 Elder Holland Reveals What He Will Talk About at General Conference

After Jeffrey R. Holland participated in the first-ever LDS Face to Face event with young single adults with Elder Donald L. Hallstrom and Sister Carole M. Stephens, the three Church leaders continued to answer some of the more than 3,000 questions they received from Church members around the world on Facebook.

Among these was a question from a 23-year-old convert who recently returned from his mission. This elder quickly became frustrated because, no matter how hard he tried, he couldn't get that same spiritual peak he maintained on his mission.

"Eder Holland, I'm a convert, I'm 23 and I got back from my mission a year ago. The excitement of being a returned missionary wore off quite quickly on me, replaced by the burden of expectations which both culture and (to some degree) doctrine put on people my age. I try to study the scriptures every day, I pray multiple times throughout the day, I partake of the sacrament weekly, I strive to be obedient and to repent when I need to but, no matter how hard I try, I can't get that feeling back which I felt as a missionary. It's like the Church I once felt so involved with is now far away -- almost unreachable. I know there's no magic formula, but if you could give me (and others struggling like me) one piece of advice, what would it be? Thanks."

This is a problem many Latter-day Saints struggle with and can relate to, as was evidenced by the 15 replies this comment received on Facebook, including a response from Elder Holland himself.

"Ottavio, interestingly enough, I am going to try to talk about this in general conference. Listen and perhaps something I say there will be helpful. In the meantime, remember this counsel from Paul to the Hebrews: 'Call to remembrance the former days in which, after you were illuminated, ye endured a great fight of afflictions.' Virtually every great experience that I know of (like a mission) is followed by 'a fight of affliction.' Work hard, be faithful, and the light will return."

All who have listened to Elder Holland's powerful, honest, and mesmerizing talks know that Elder Holland rarely ever "tries" to cover any topic; he thoroughly and diligently digs into the core of any matter, speaking of his subject in a way that pierces the memory and soul. Because of this, I am excited, along with thousands of others, to hear Elder Holland tackle this topic in just a few weeks.

For more personalized counsel from Elder Holland, check out To My Friends.

"If you need a burden lifted, I want you to imagine I am in a personal, private, closed-door chat with you. I want to help you if I can." With those words, Elder Jeffrey R. Holland invites every reader of his latest book to become a friend, to receive instruction and encouragement, counsel and comfort.