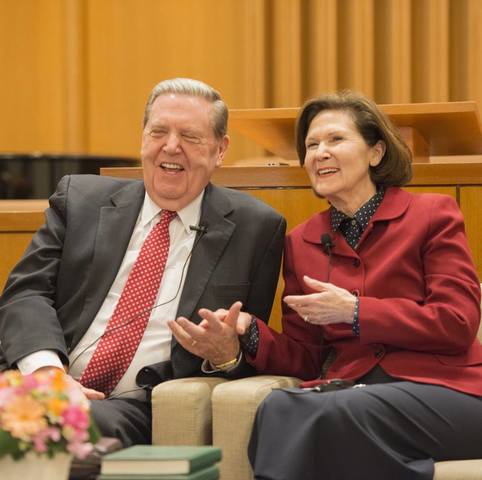 Elder Holland Shares Honest Marriage Advice Every Couple Needs to Hear: Keep a Sense of Humor and Buckle Up

When it comes to directness and inspiration—saying things how they are while still providing encouragement—no one can top Elder Jeffrey R. Holland. His extensive vocabulary, common sense, poetic language, wisdom, and faith just immediately put things into perspective.

Take, for example, the recent marriage advice he shared on social media this week, which demonstrates the real work, real frustrations, and real laughter that go into every marriage:

But also, in marriage, there is nothing tentative. We must sit down, buckle up, and get on the road. Do not leave yourself an escape route. Don’t say every 20 minutes, “Well, I’m not as excited about this as I thought I’d be! This isn’t how they told me it would be.”

It is a gospel truth that you can make the marriage you want. That’s the issue of agency. It doesn’t mean that bad days won’t come, because they will. It doesn’t mean there isn’t going to be sorrow and sadness and arguments, some highs and lows, and some things that don’t work out. That’s life.

I would not want anyone to misinterpret what I’m saying—I realize there may be an abusive or violent situation giving a legitimate reason to get out of a marriage. When there is a legitimate exception, you’ll know, your priesthood leaders will know, and God will know. But the rule is, you work and pray and serve and love and laugh and forgive and hang in there. That’s the rule. You can make the marriage you want. That is a gospel truth.